One of my favorite movies growing up was Pee Wee’s Big Adventure. I remember wearing out our VHS from repeat viewings and can probably recite scenes word for word.

I was a pre-teen when I learned that the scene above was a real place you could visit, and in my home state no less! It took me over a decade till I finally found the opportunity. In February my partner and I had a road trip to make and figured we’d squeeze in what we could along the way. This was the first and most important stop.

A quick background of this roadside attraction. The Cabazon Dinosaurs reside in the desert just outside of Palm Springs, California. Its creation began in 1960’s by Knott’s Berry Farm artist Claude Bell. It started with the construction of Brontosaurus “Dinny” and followed with his Tyrannosaurus “Rex.” Claude purchased the land to develop as fully themed truck stop filled with other elaborate prehistoric creatures but lengthy construction times and costs prevented him from realizing these projects before his death in 1988. His obituary in the L.A. Times here goes more into his and the dinosaurs’ history.

The site has changed extensively over the years. At one point the area was used as a creationist museum and the adjacent Wheel Inn Diner where we learn the story of Large Marge has since been demolished. There is now an attraction called Mr.Rex’s Dinosaur Adventure which guests can pay admission to explore, which of course we did. Tickets for Mr.Rex can be purchased in Dinny’s gift shop which is still open to all visitors. Entry into the attraction is $13 per adult. After comparing photos of the area during its creationist period and now it seems they just stripped the religious themeing and re-worked it into being purely dinosaur related. 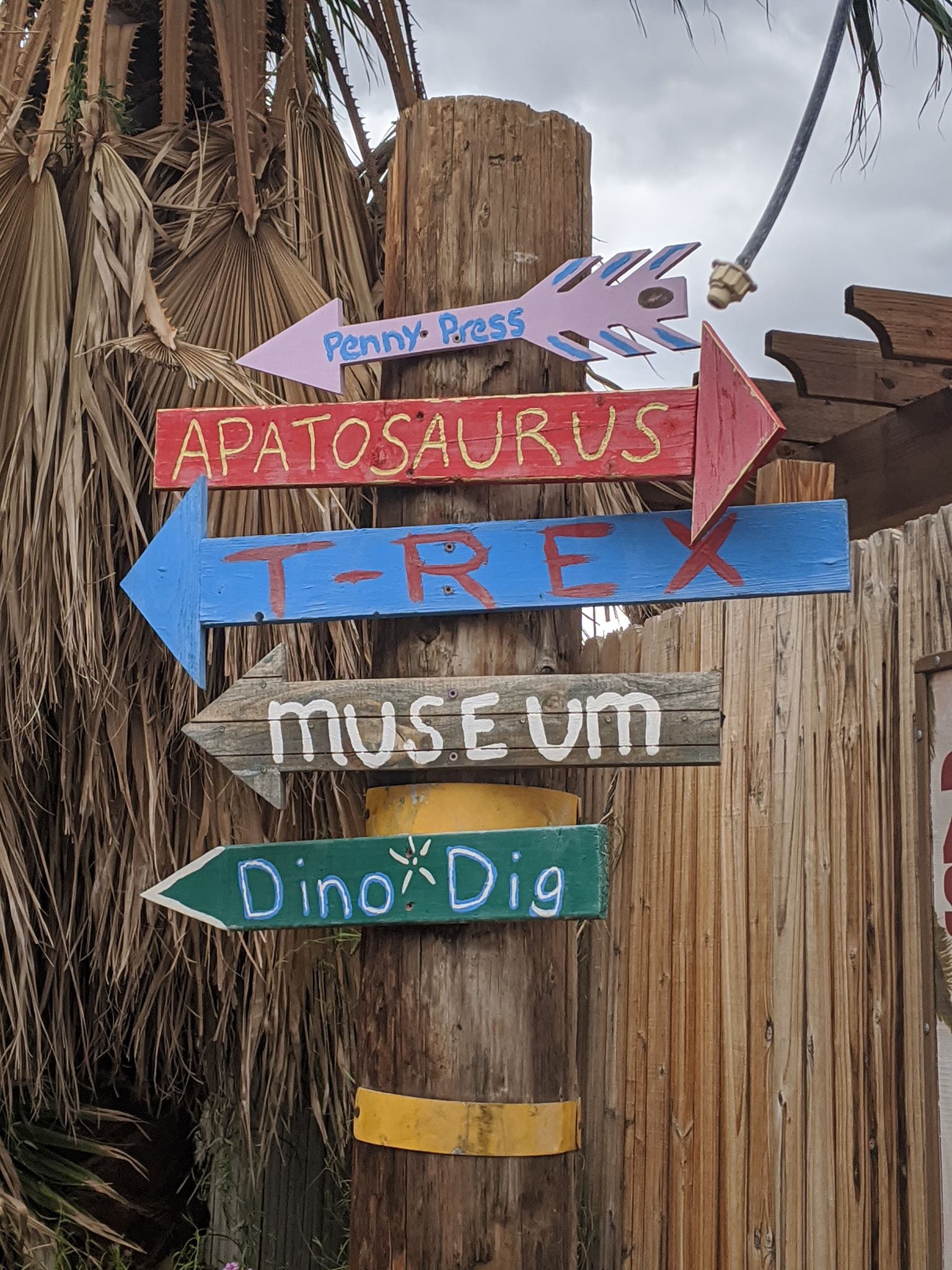 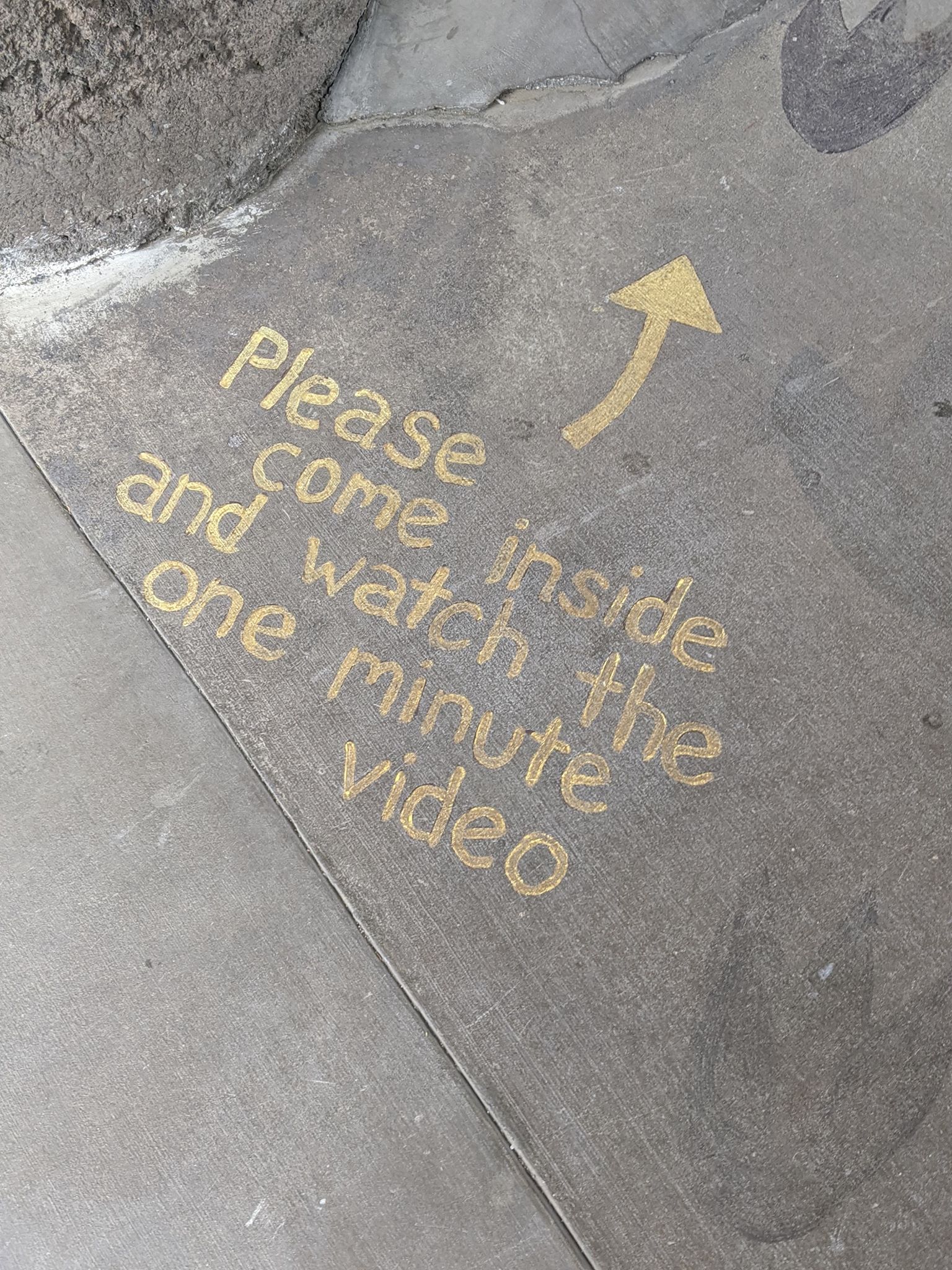 Upon entering the main building/second gift shop you watch the introductory video below explaining what’s offered. You can hear the roar of several robotic dinosaurs waiting for us just ahead. 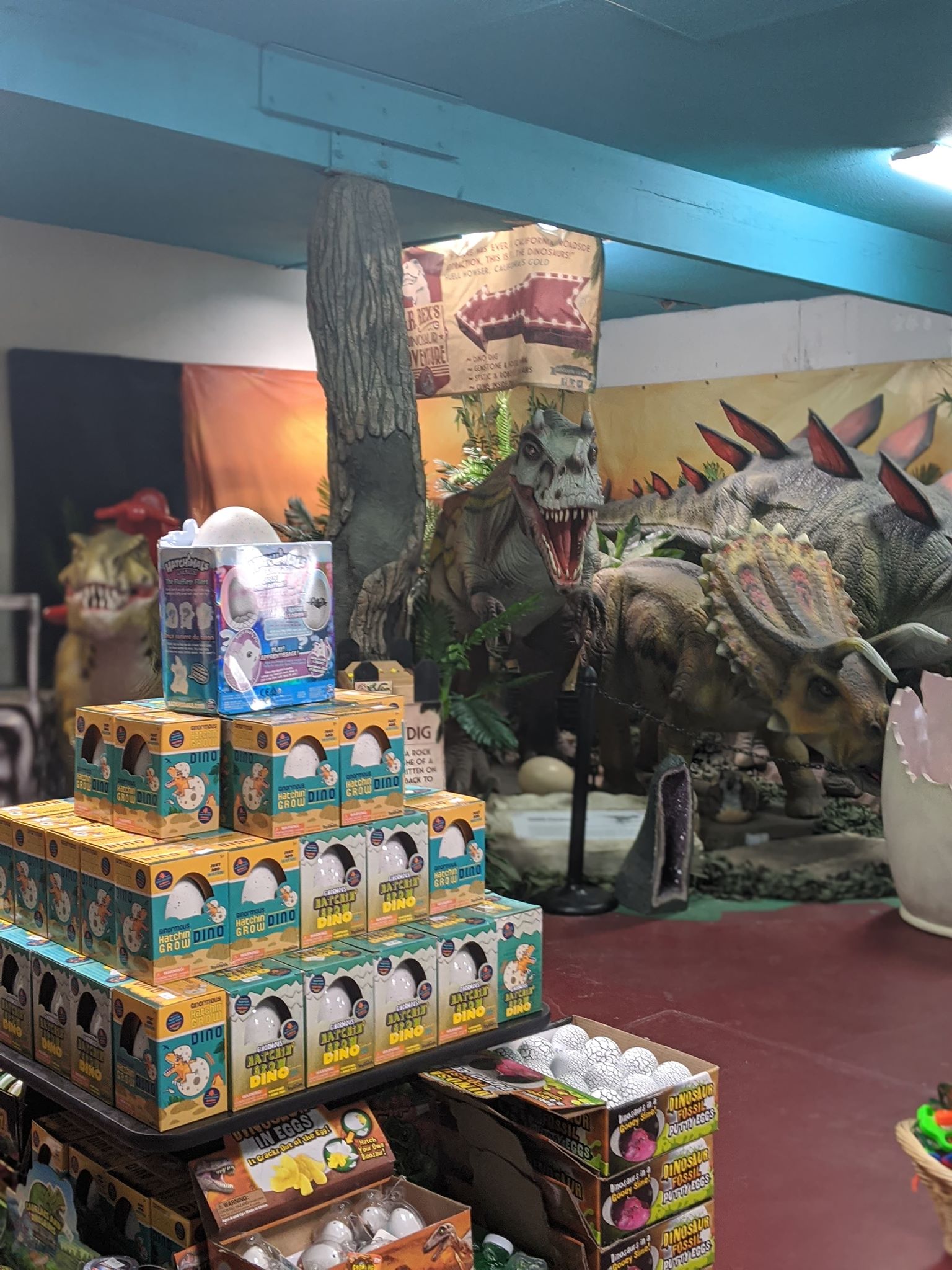 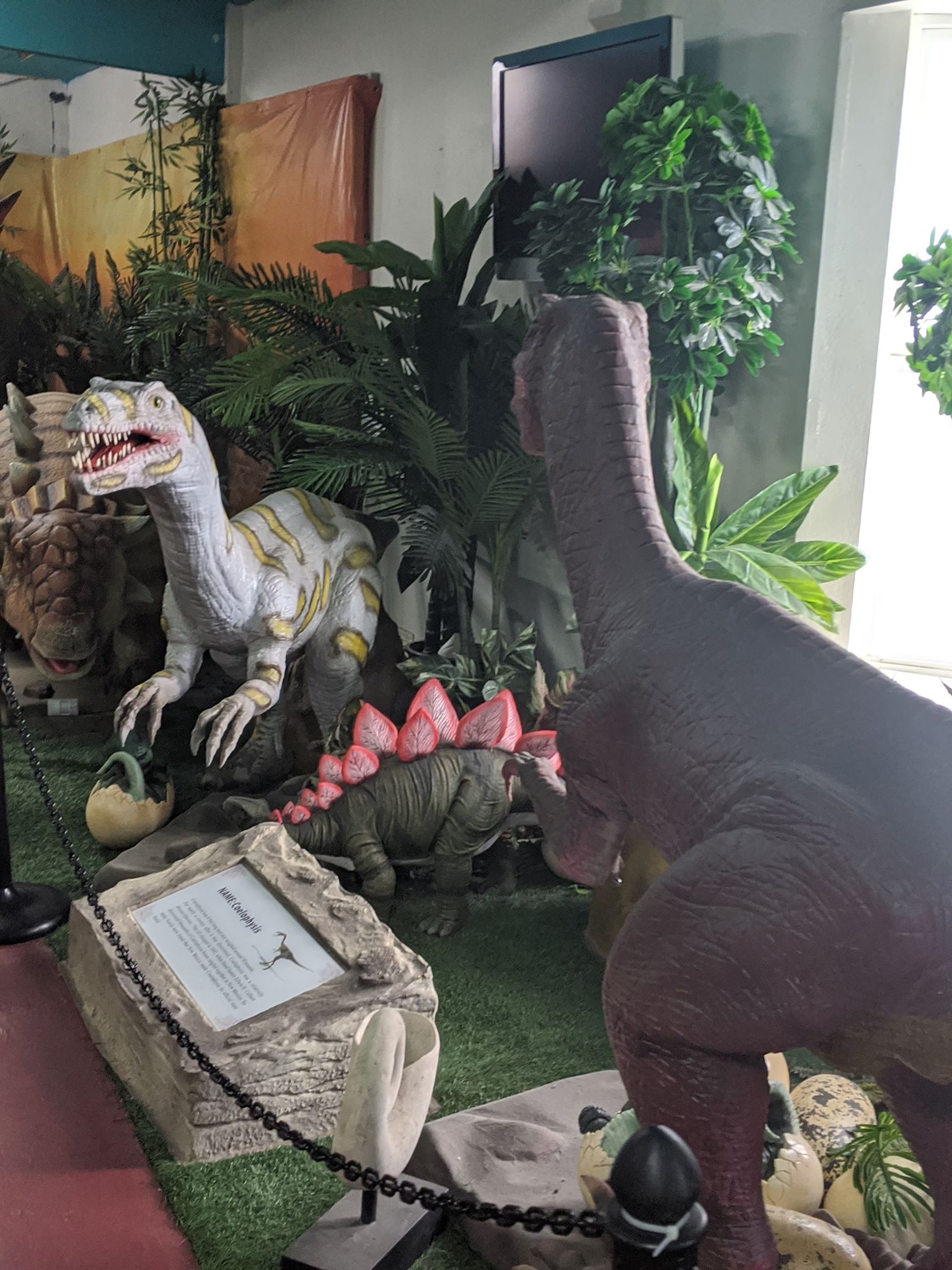 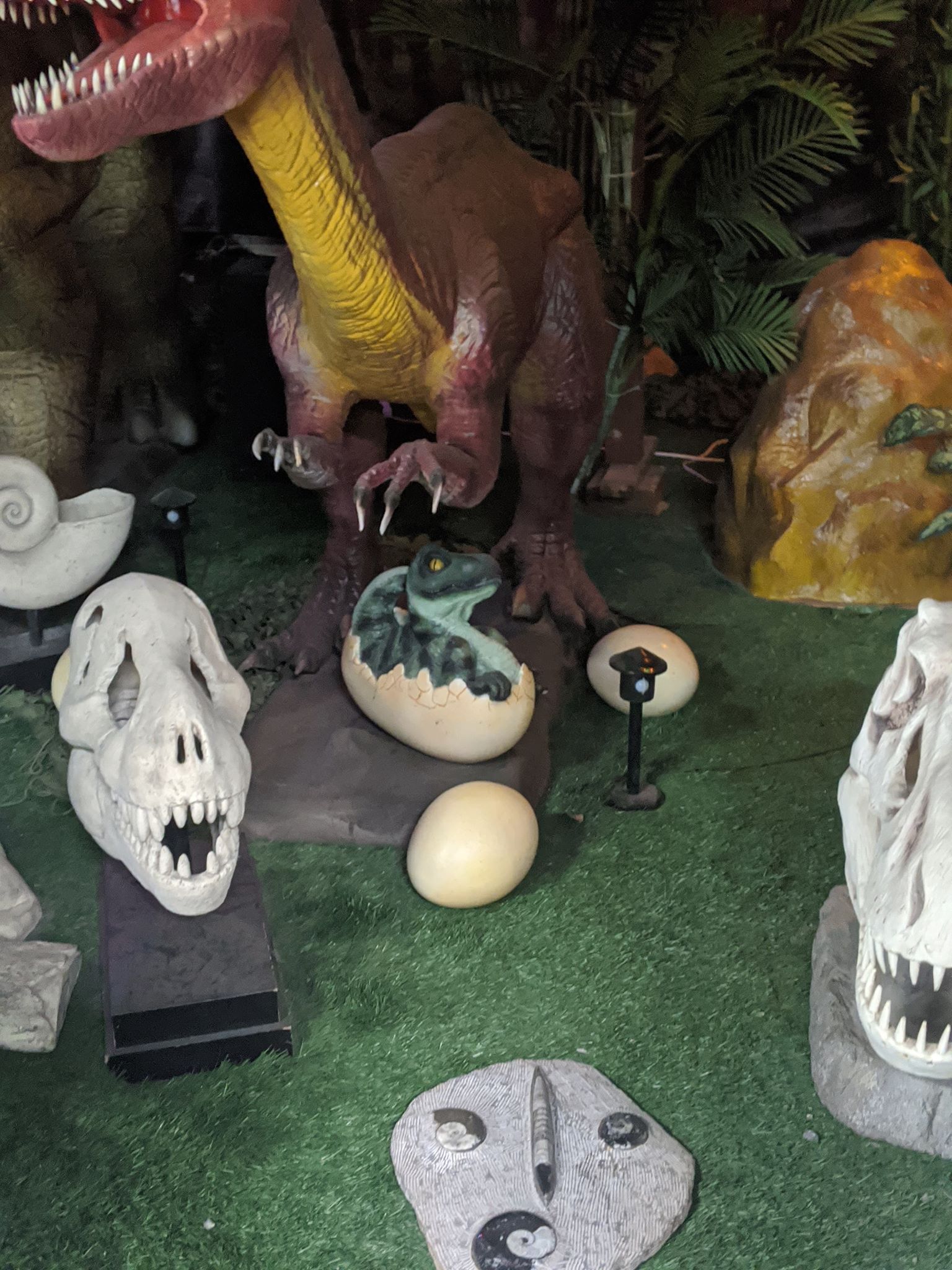 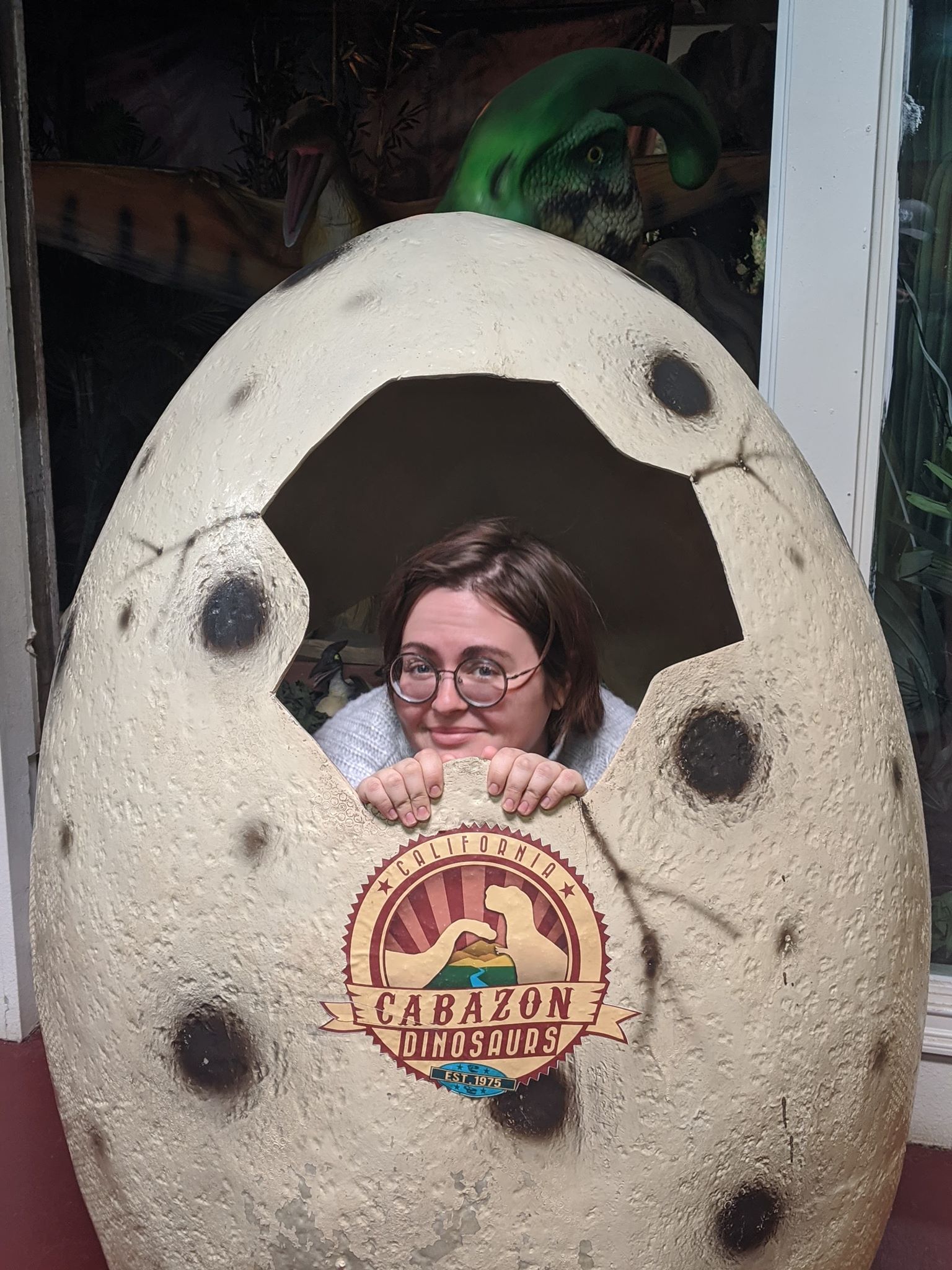 After touring the shop we headed outside to explore. The outdoor area is a small botanical garden with dinosaur statues sprinkled throughout. 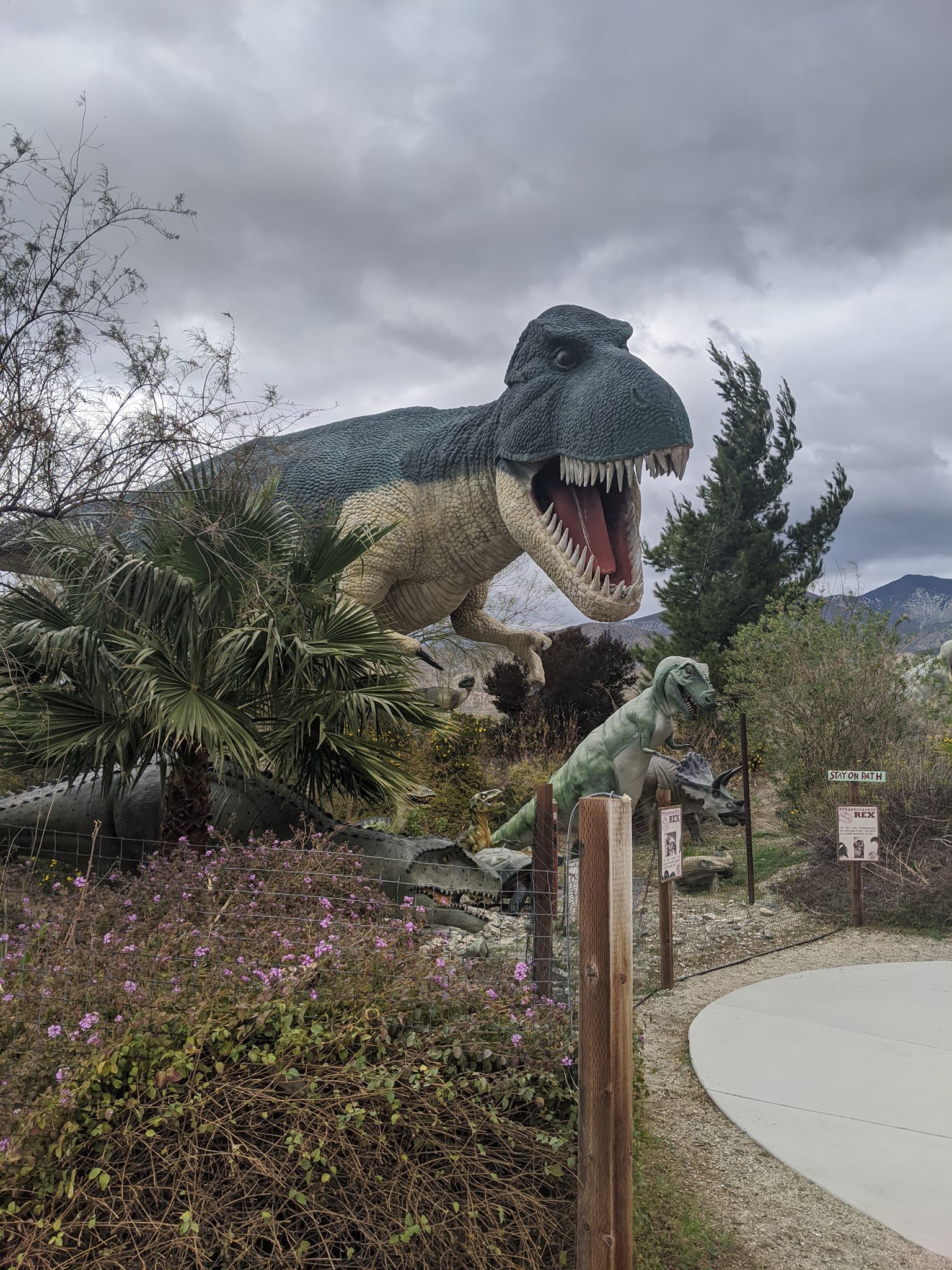 We briefly played with the panning station. 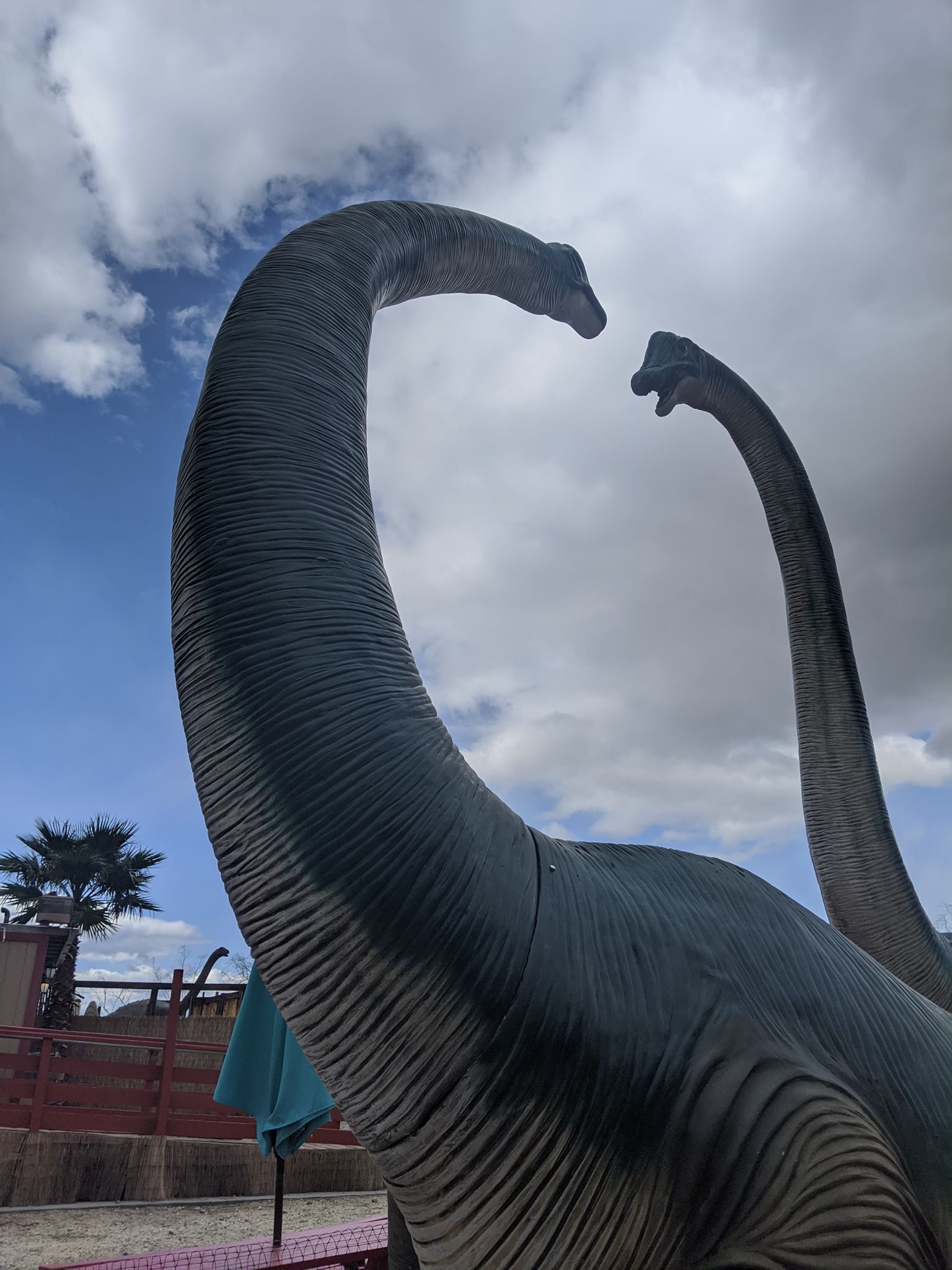 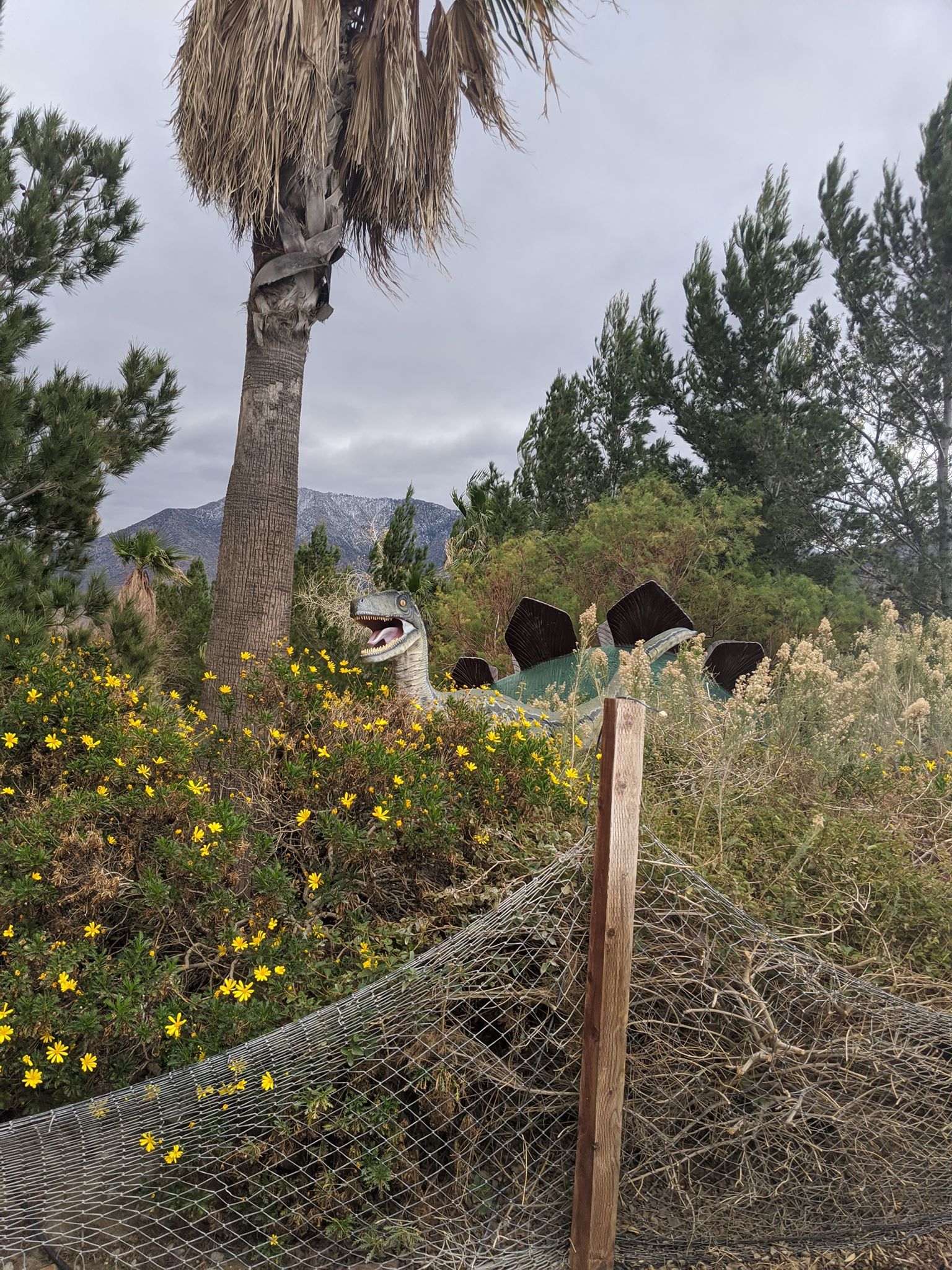 Special shout out to this long boi below. 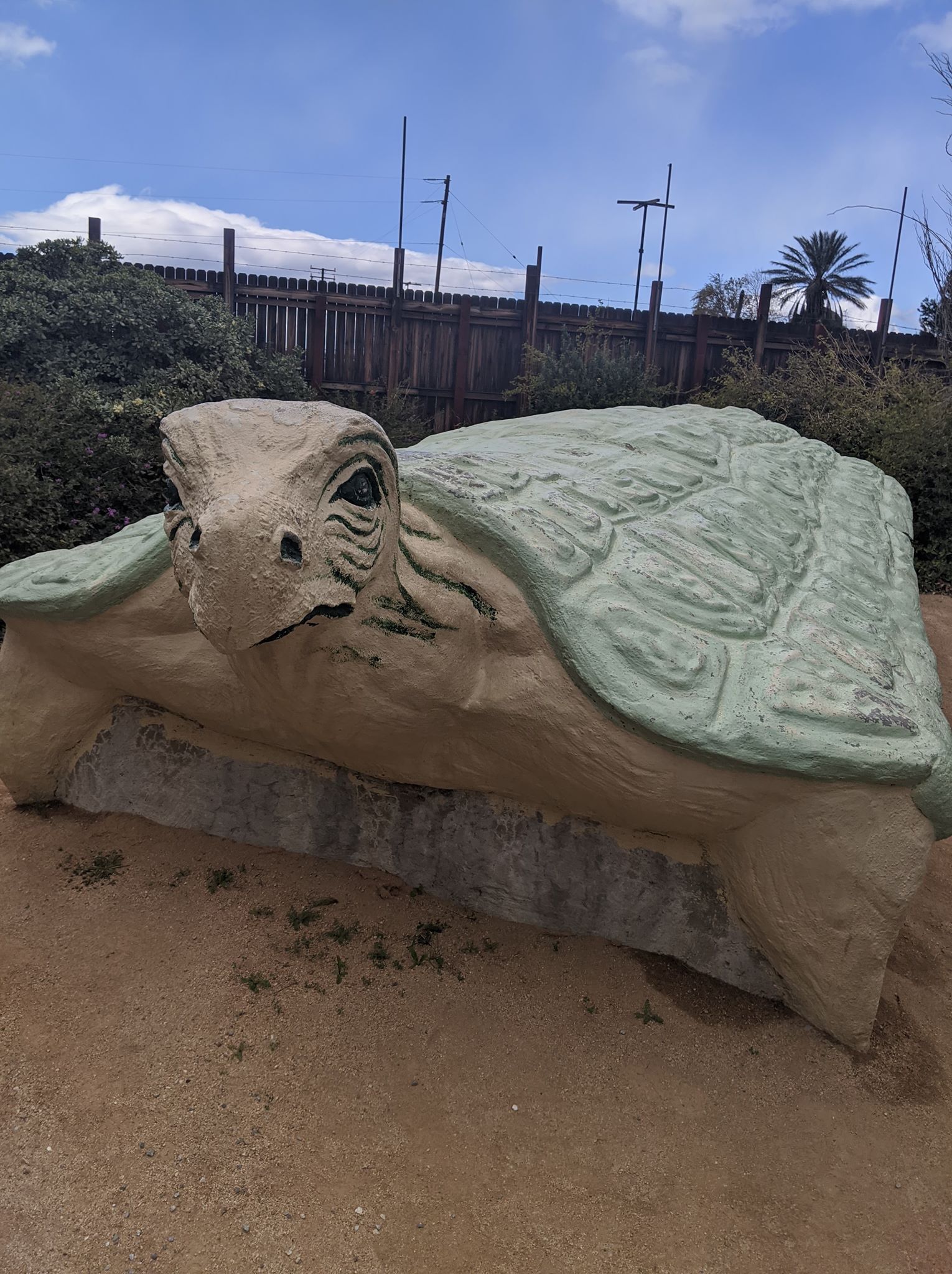 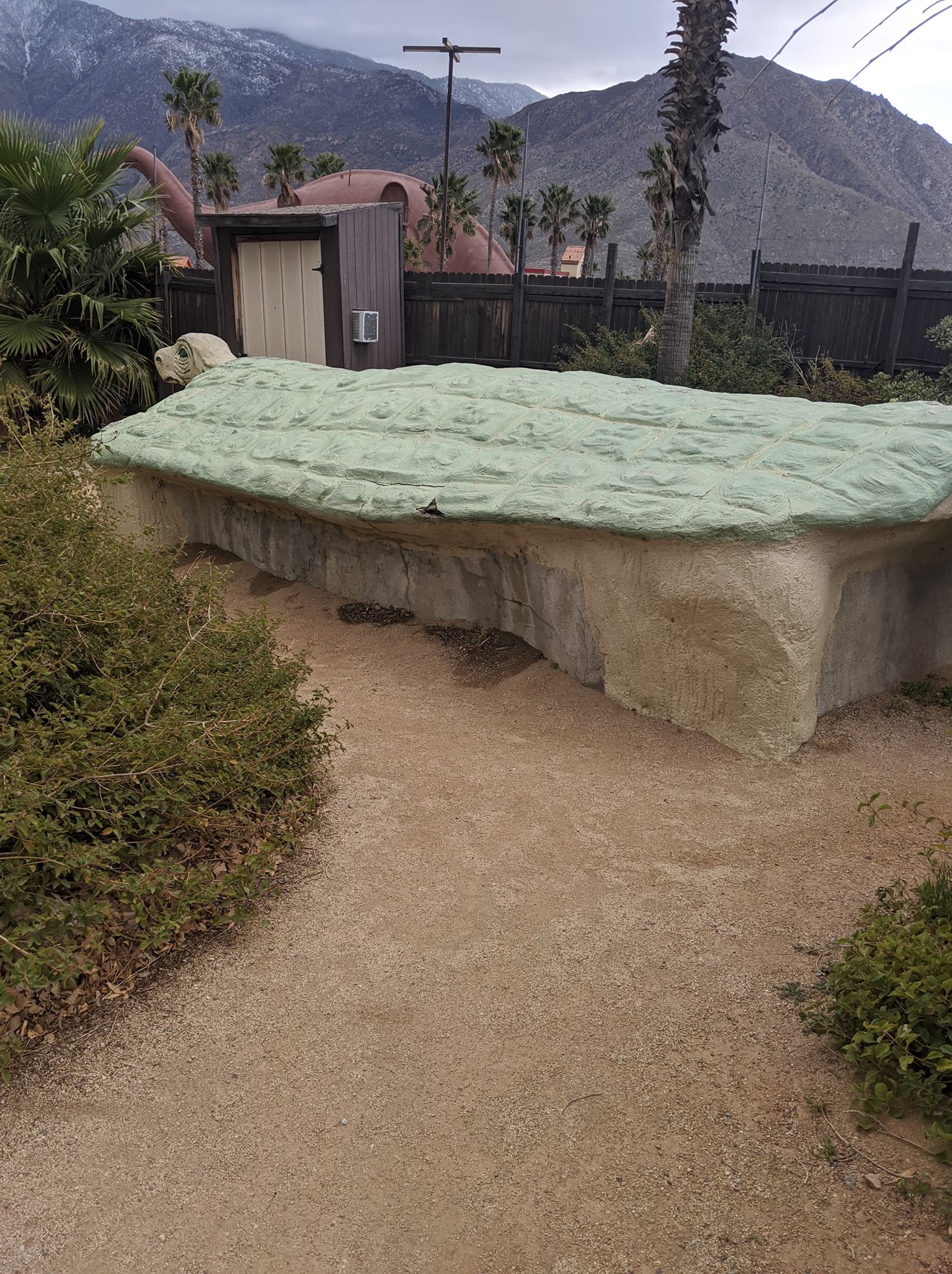 While you can’t really sit in Rex’s mouth like Pee Wee (sadly that beautiful version was a set) You can climb up inside Rex and sit in his head. 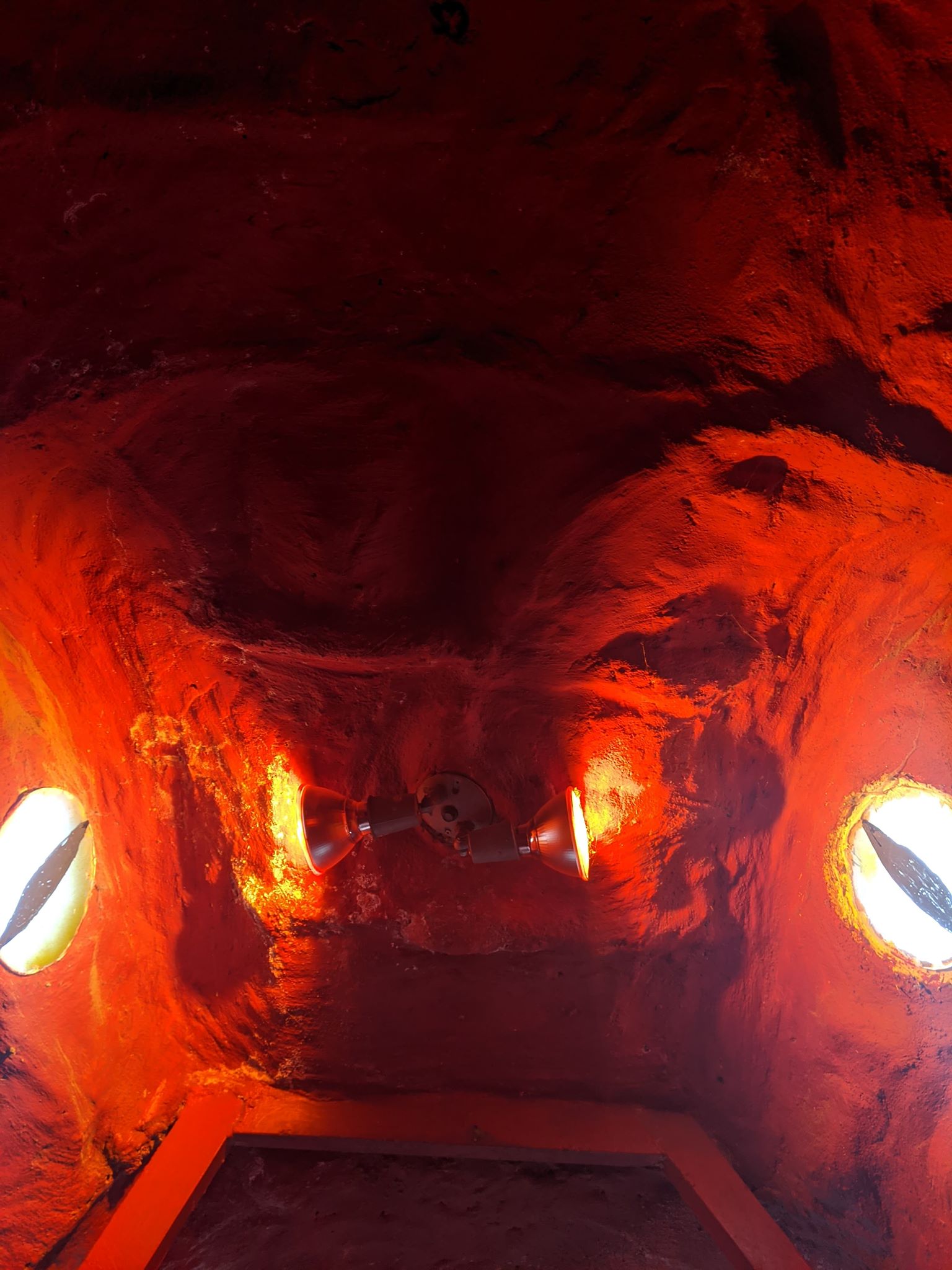 On our way out we tried out the dino dig and got our souvenirs! 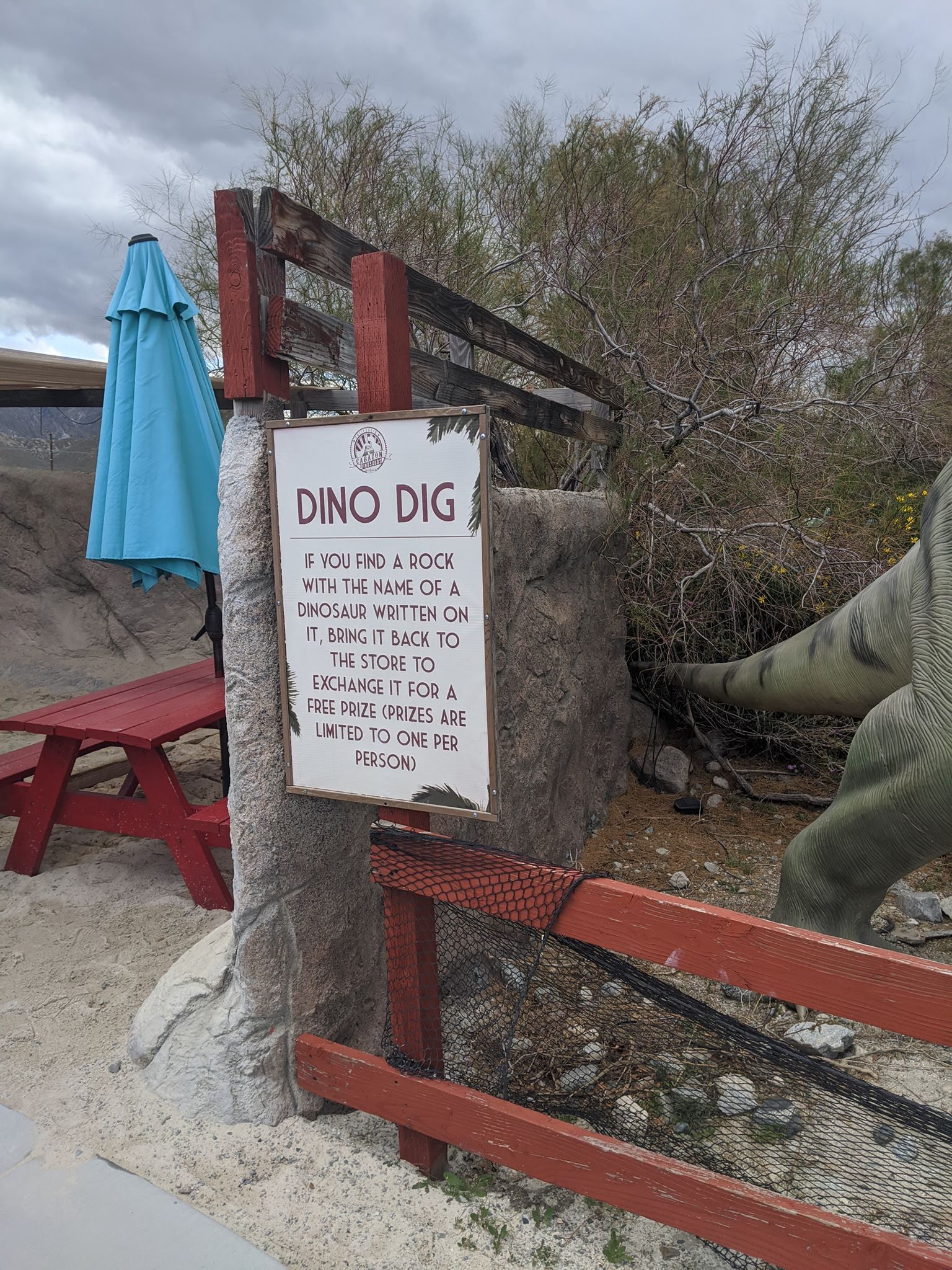 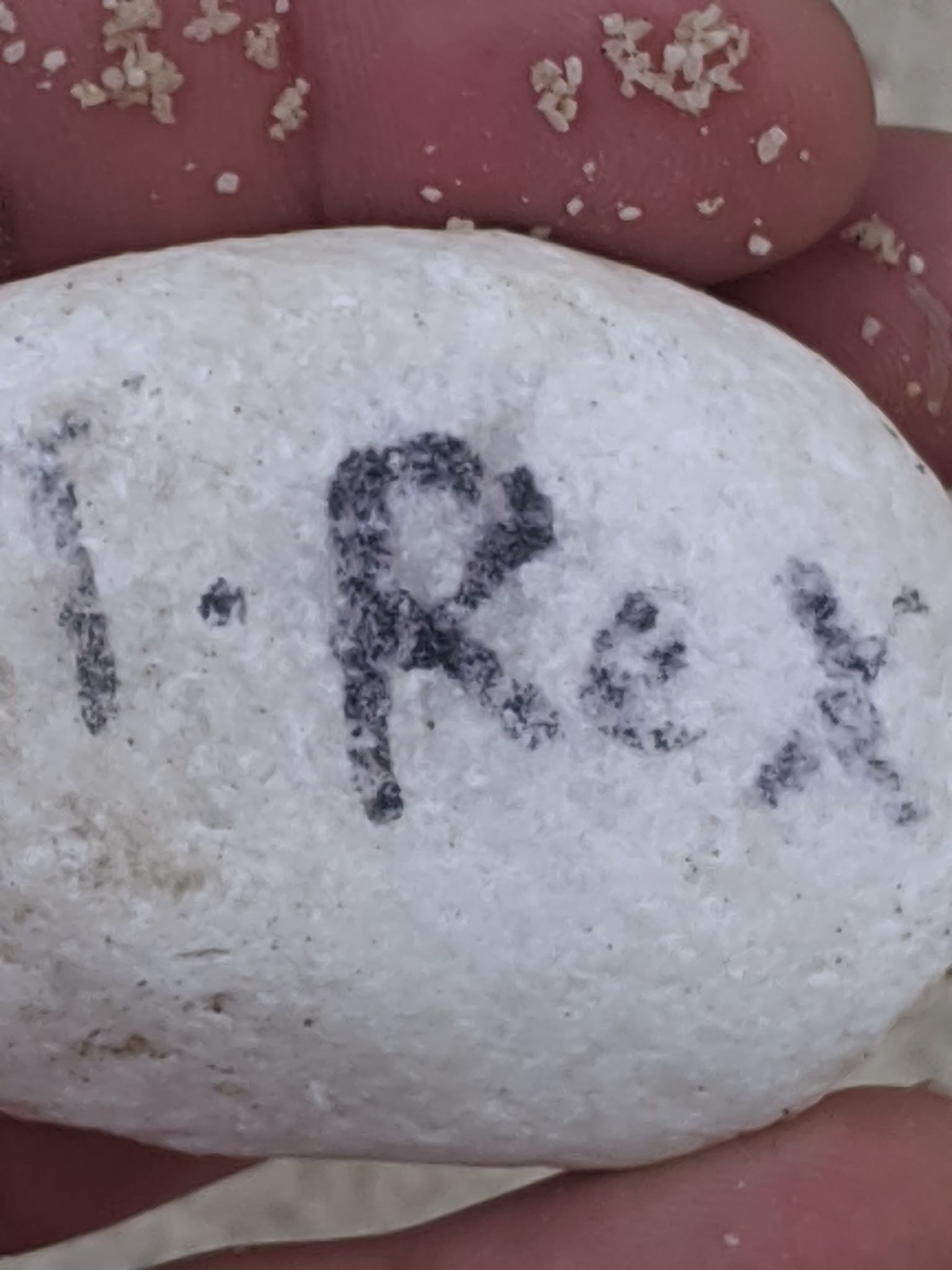 We exchanged our rock for a tiny skeleton ankylosaurus that I gave to my nephew. Not photographed here because I forgot and it is now in the wasteland of my sister’s yard, to be dug up by post apocalypse tribes some day.

The Cabazon Dinosaurs are a quintessential roadside attraction and a piece of pop culture history. I highly encourage stopping by if you have the opportunity and giving Dinny a nice hello. For a final piece of nostalgia I found that Chapman University has archived episodes of the series California Gold specifically the episode where Huell Howser visits the dinosaurs. The segment starts at around the 12 minute mark.