While the parks are now slowly reopening, before then food festivals were the thing at three major parks in Southern California. Knotts Berry Farm, Disney’s California Adventure, and Universal Studios all hosted their own variation of ticketed tasting events where folks can roam their parks trying old and new favorites.

Of course Knotts was the trendsetter for these events, the last incarnation “Taste of Boysenberry Festival” being their 4th such event. Previous events have been themed after their popular Scary Farm and Merry farm events. This incarnation was a take on their annual Boysenberry Festival event, celebrating all things related to the berry.

If you haven’t picked it up by now, I am a boysenberry fan. Growing up I was hooked on the stuff thanks to my grandmother who always used them for pb&b sandwiches. And since becoming a regular Knotts attendee I’ve grown to appreciate the berry’s versatility in savory and sweet dishes.

Quick Lesson: WTF is a boysenberry? 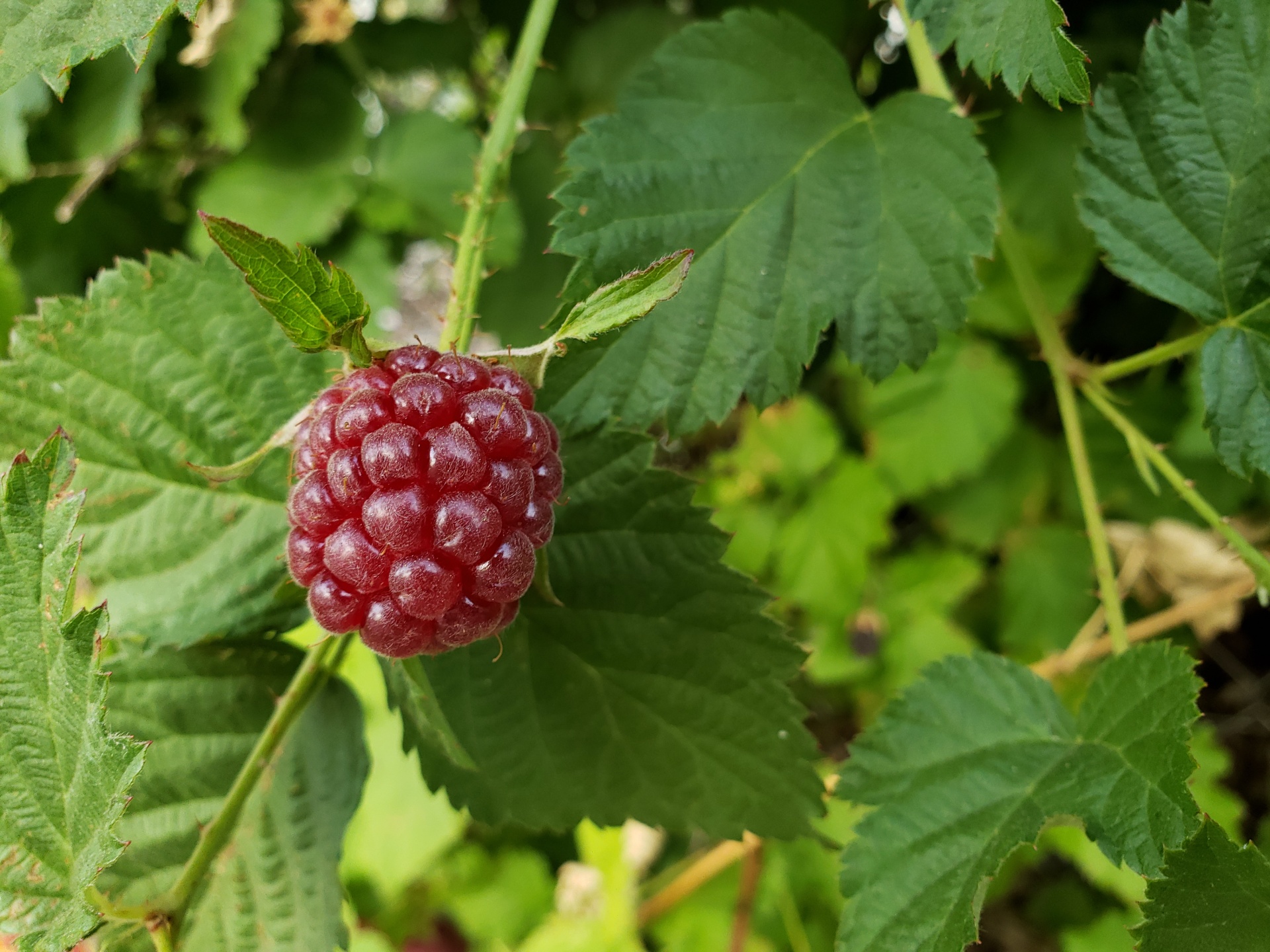 The Boysenberry is a crossbreed of the raspberry, blackberry, dewberry, and Loganberry. Originally grown and then abandoned by Rudolph Boysen (the plant’s namesake), it was Walter Knott who successfully cultivated the plant which became his claim to fame. It is most popularly used in jams and preserves but Knotts has expanded its berry product catalog to include items such as bbq sauces and teas.

For this event each guest is provided with a tasting card which allows you to get 5 items available on their menu (items and locations handily listed on the tasting card itself). Locations are spread throughout the park along with generous shaded tables and bench seating. Below are the locations my partner and I visited and which items we tried. 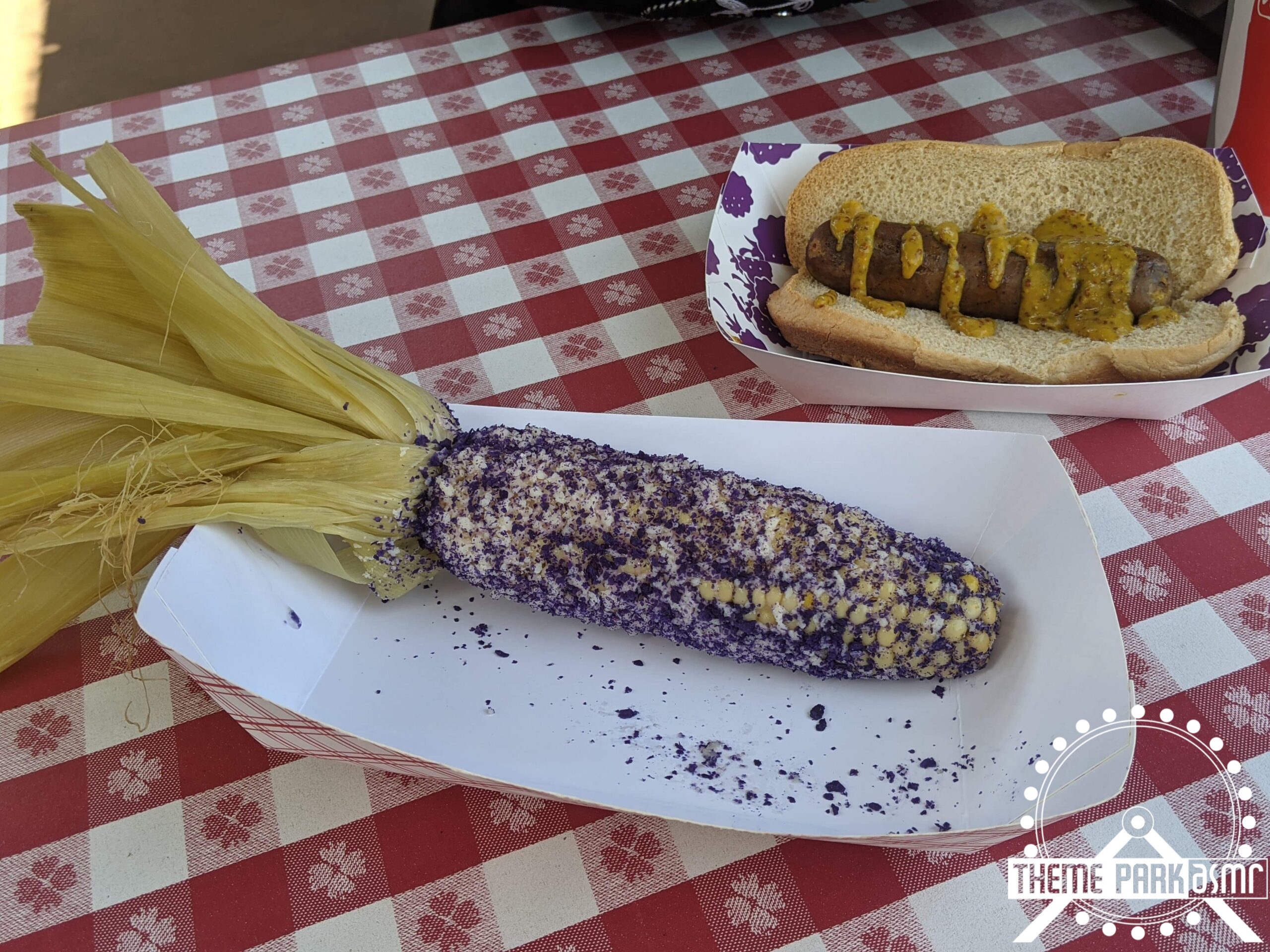 Fireman’s BBQ is the most reliable quick service location in Knotts and my partner and I always hit them up first. Both items were a good balance of sweet and savory, though I wish the corn had been grilled a tad longer. 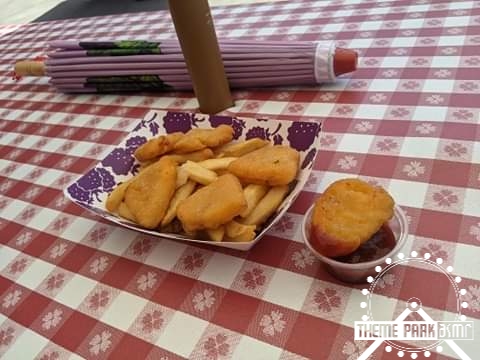 This is one of the dishes where the food is really just a delivery device for the sauce, the real star. I wish these sauces were for purchase cause I was all about it. the boysenberry balances out the sweetness of the ketchup. 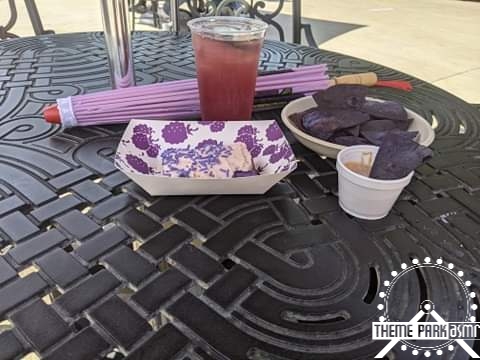 So the past few times we have gotten food from La Papa Loca it’s been a bit of a flop. The queso was -fine- but my festive purple chips were a little soggy and sad. As for the cake my partner is a sweets fiend and devoured it. It was thick and moist and the boysenberry frosting -very- sweet. The Aqua Fresca was light and refreshing, lovely to drink while sitting in the shade and vibing to music.

Shout out to the nearby DJ whose set went from 80s bops to 90s R&B to Owl City. Flawless transitions and folks did not appreciate you nearly enough. 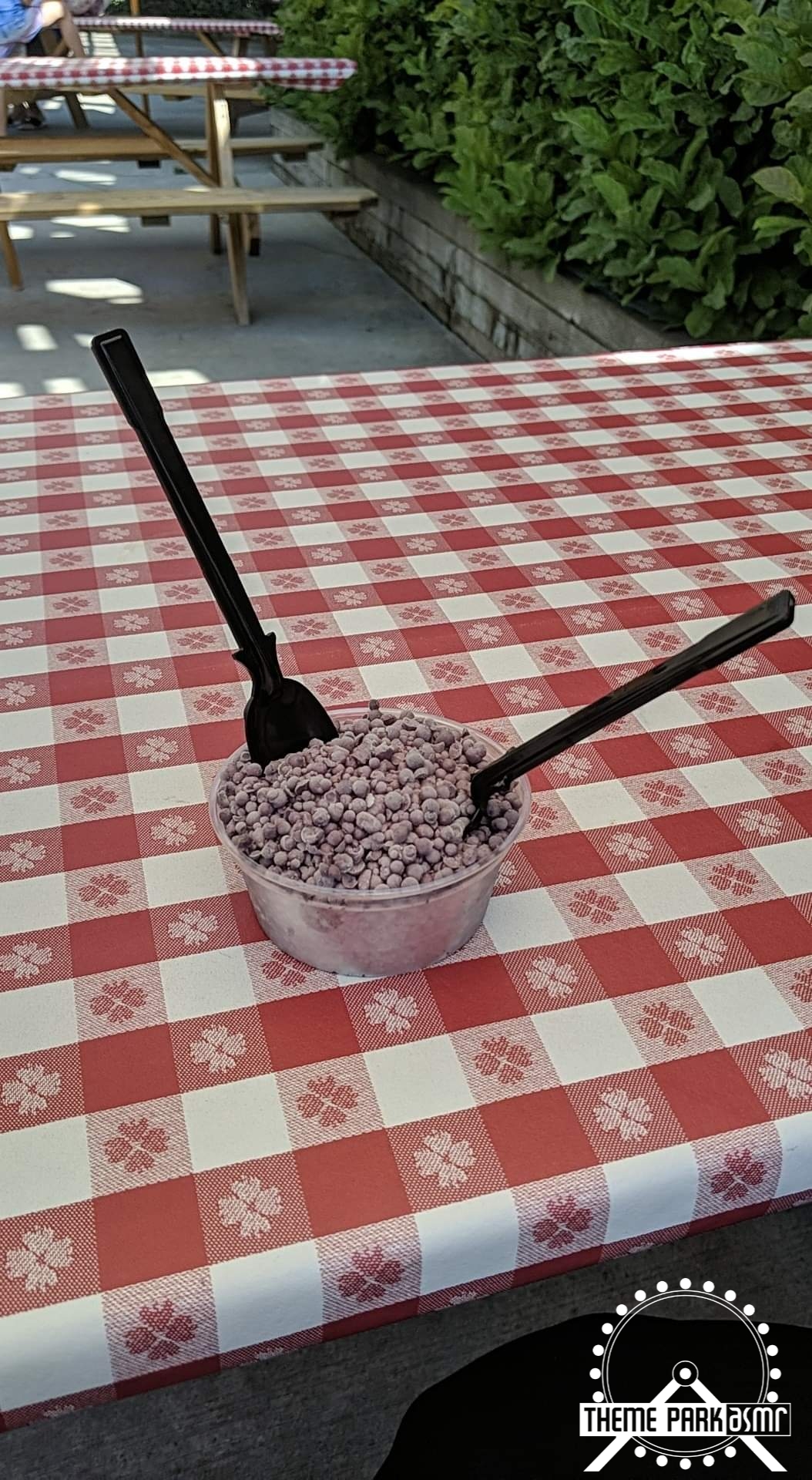 I know these were divisive and a lot of folks likened them to grape but I was into these. Maybe not a must get but if you have a food item left on your tasting card it’s not a bad choice! 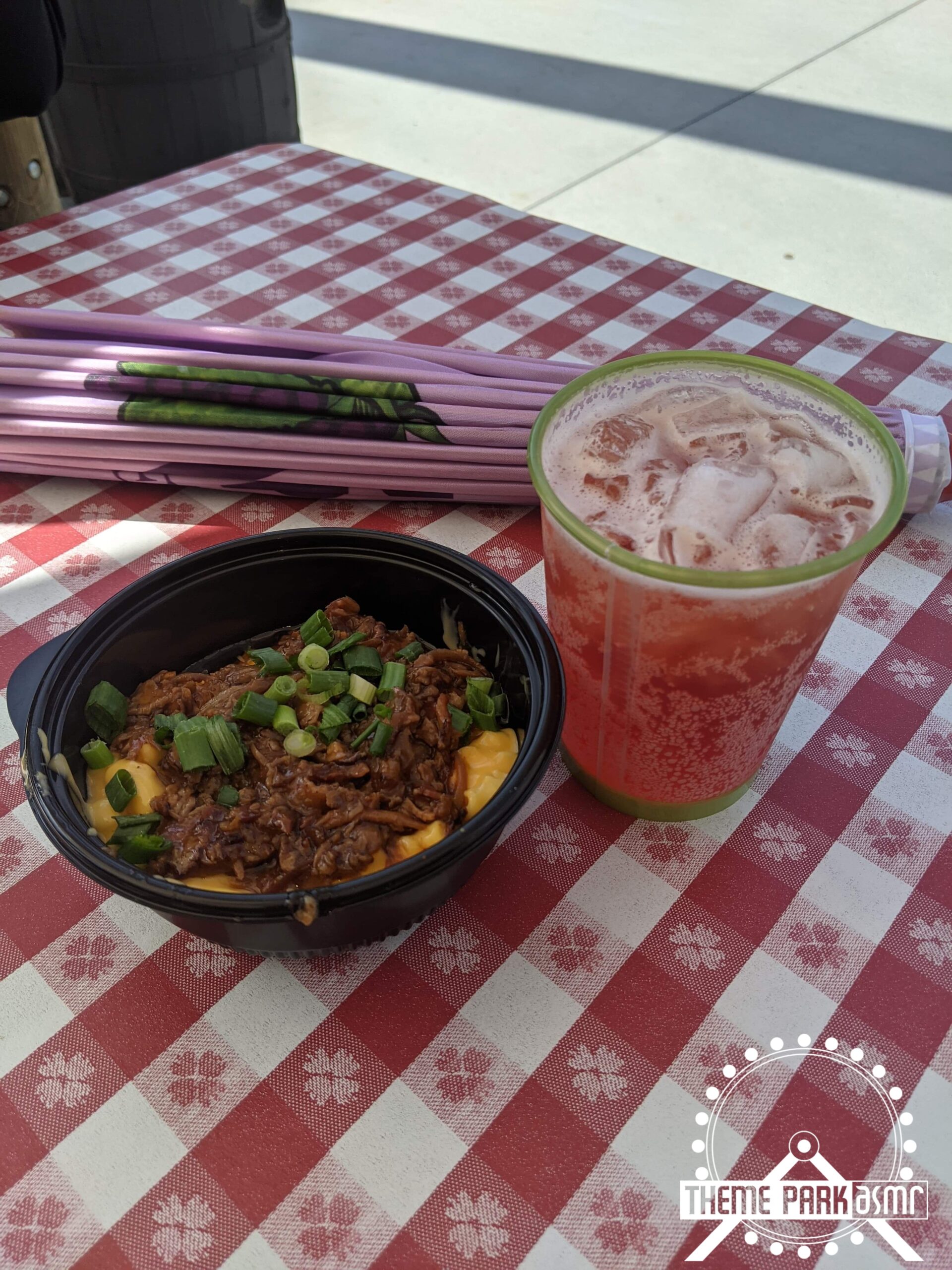 For the mac and cheese I wish it was more savory as sweet mac and cheese feels…wrong to me. Not terrible just was not something either of us were into. Berry cider was very light, fragrant, and fruity. I’ve learned from these dining events that if I’m hitting them up early to stick with the lighter alcohols as the wines and beers make me sleepy. Is this a getting old thing? Probably.

Hands down favorite sweet item we got. Light, tasty, very easy to quickly consume, and get a brain freeze. Also they give you the thick boba-style straws which I appreciate so you don’t have the Slurpee straw struggle.

I have to admit I’m bummed there was no fan art shop for this event like they had for taste of merry and scary farm. I really love Knotts showcasing the talents of independent artists and admittedly prints are my weakness. In particular there’s an art booth over in Fiesta Village who I have purchased prints from several times, including a Halloween themed WandaVision print this visit. 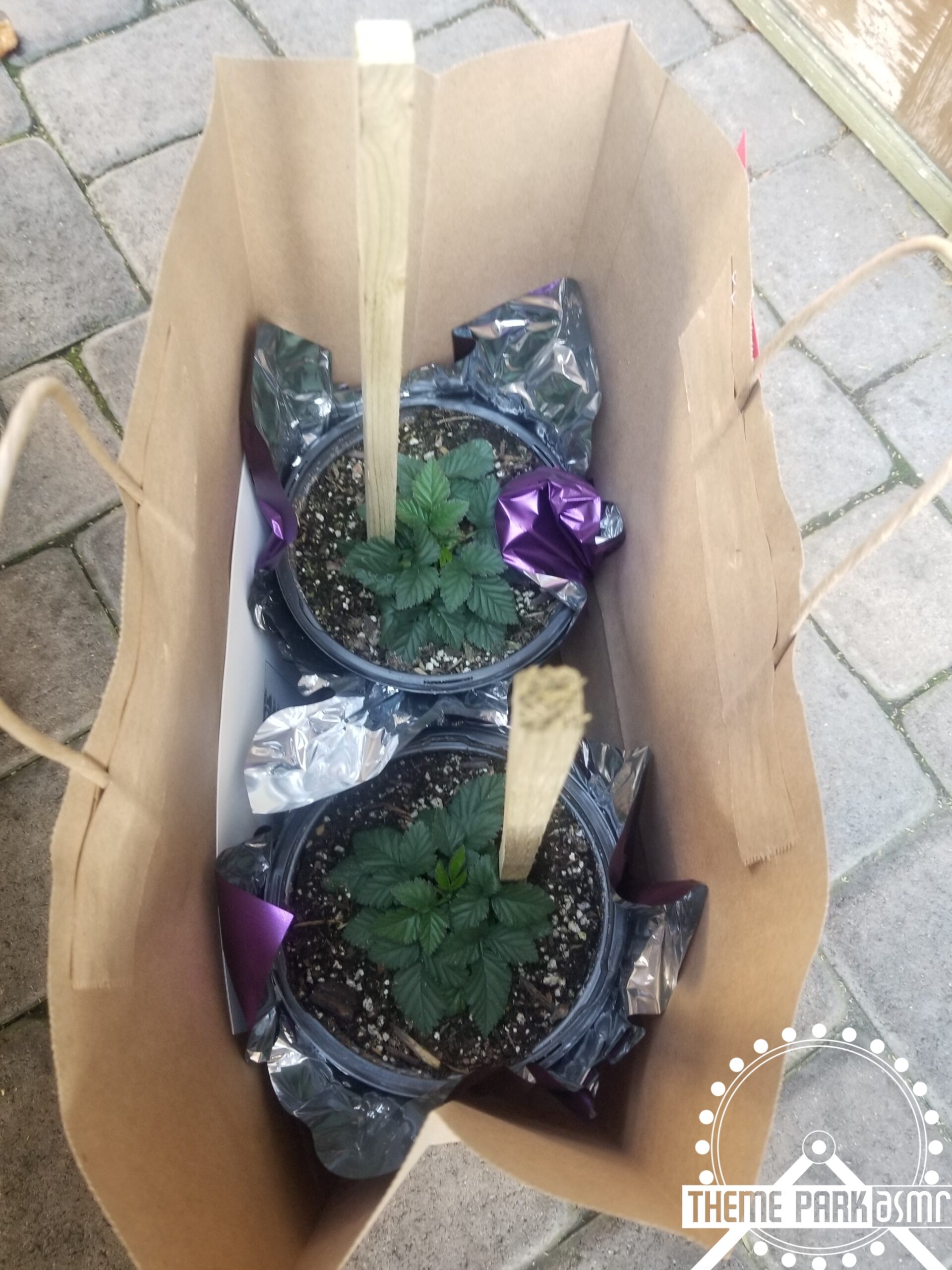 Did I also buy 2 boysenberry plants to take home though? Absolutely. My plant from last year, Walter I, sadly passed away when accidentally left out in a wind storm. My replacement Walter II surprisingly held on strong with one surviving stem that is currently thriving and doing it’s best. My hope is he’ll be a good influence on my new kids Cordelia and Rolly.

I was also happy to see later into the event they opened up the gem and mineral shop, which is my go-to shop in the park. The shop is a treasure trove of gem and fossil samples. The shop also does Geode cutting and has a gumball machine where you can get small prizes. Its $6 a token and to date I’ve always gotten at least that worth of items if not better. This time I got some dyed agate, 2 pieces of pyrite, an arrowhead, and a nifty chunk of fluorite.

The park has been having fun with the Camp Snoopy area, going buck wild with various decorations. In anticipation for Easter, the theme seemed to be psychedelic Bunnies. 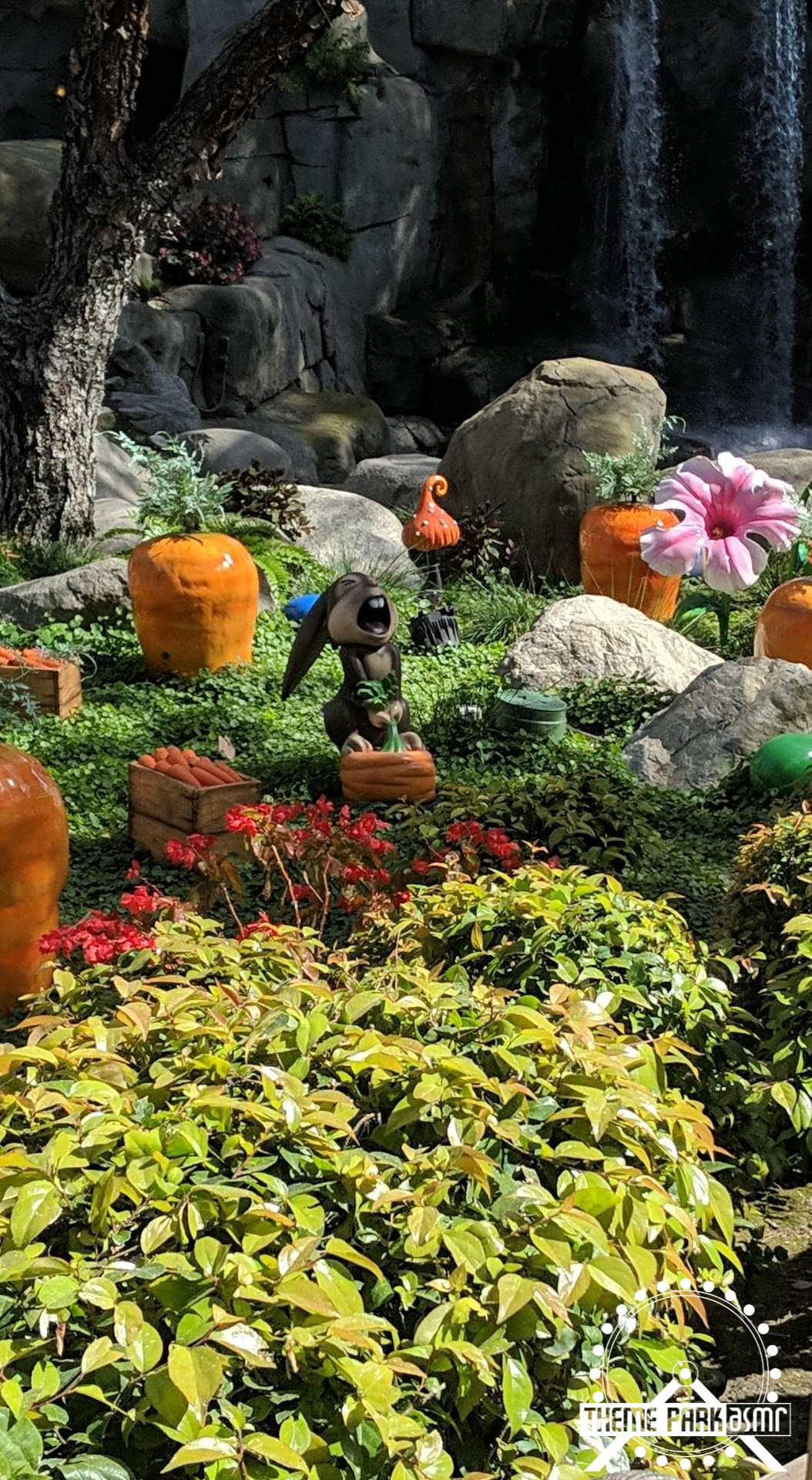 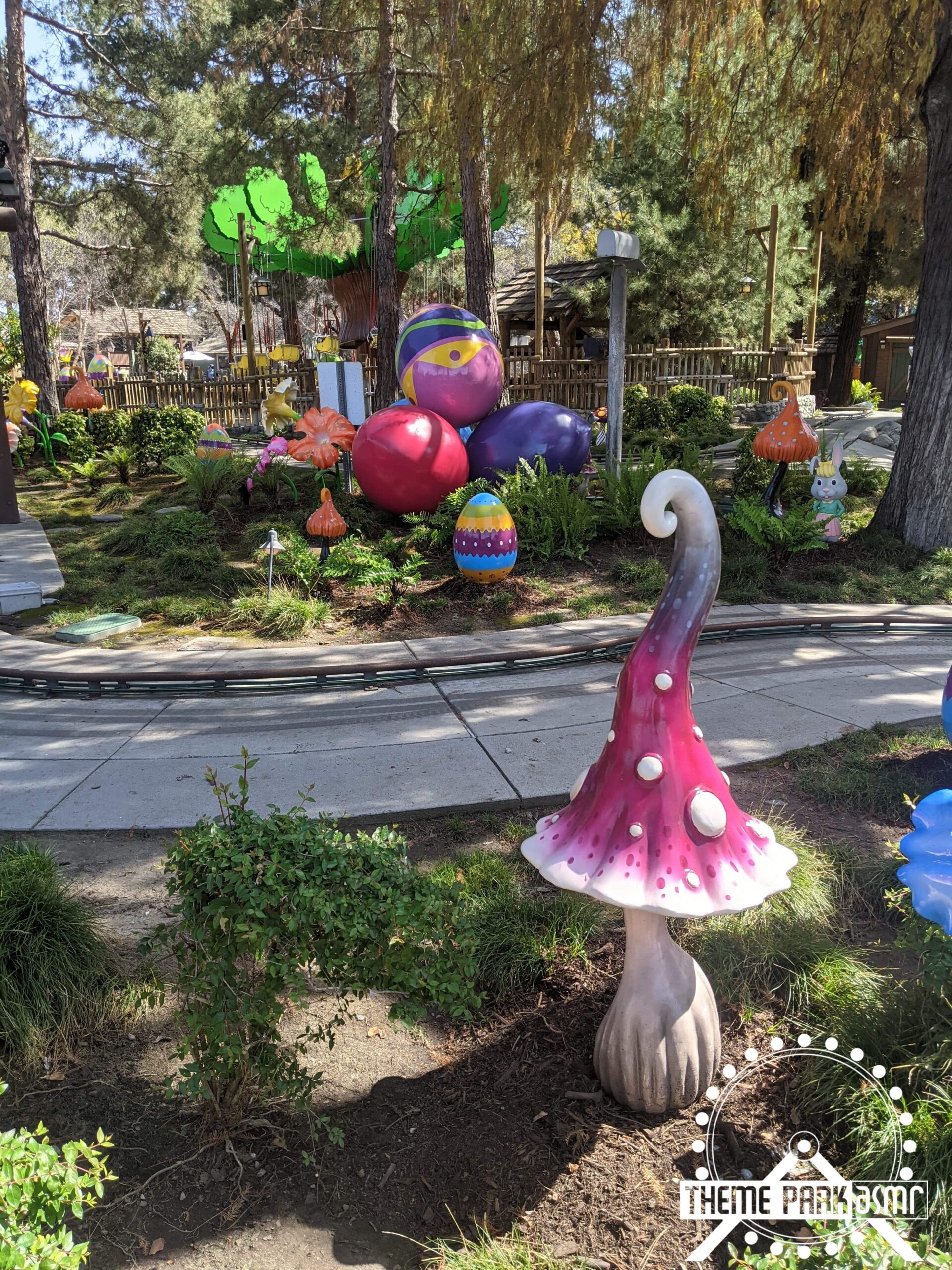 Finally with my partner and I being absolute gluttons we absolutely took some Mrs.Knotts chicken to go.

Overall I have to say I really appreciate the effort Knotts has put into safe, entertaining events over the past year. I do look forward to attending the park again with rides later this week.