Despite living in San Diego all my life I’ve never been a “beach culture” person. So going to San Diego’s beachfront staple, Belmont Park, was something I had never gotten around to doing. My partner and I had the rare same day off together and with us both being fully vaccinated he decided to treat me to a day at the park.

A Quick History of Belmont Park and The Giant Dipper 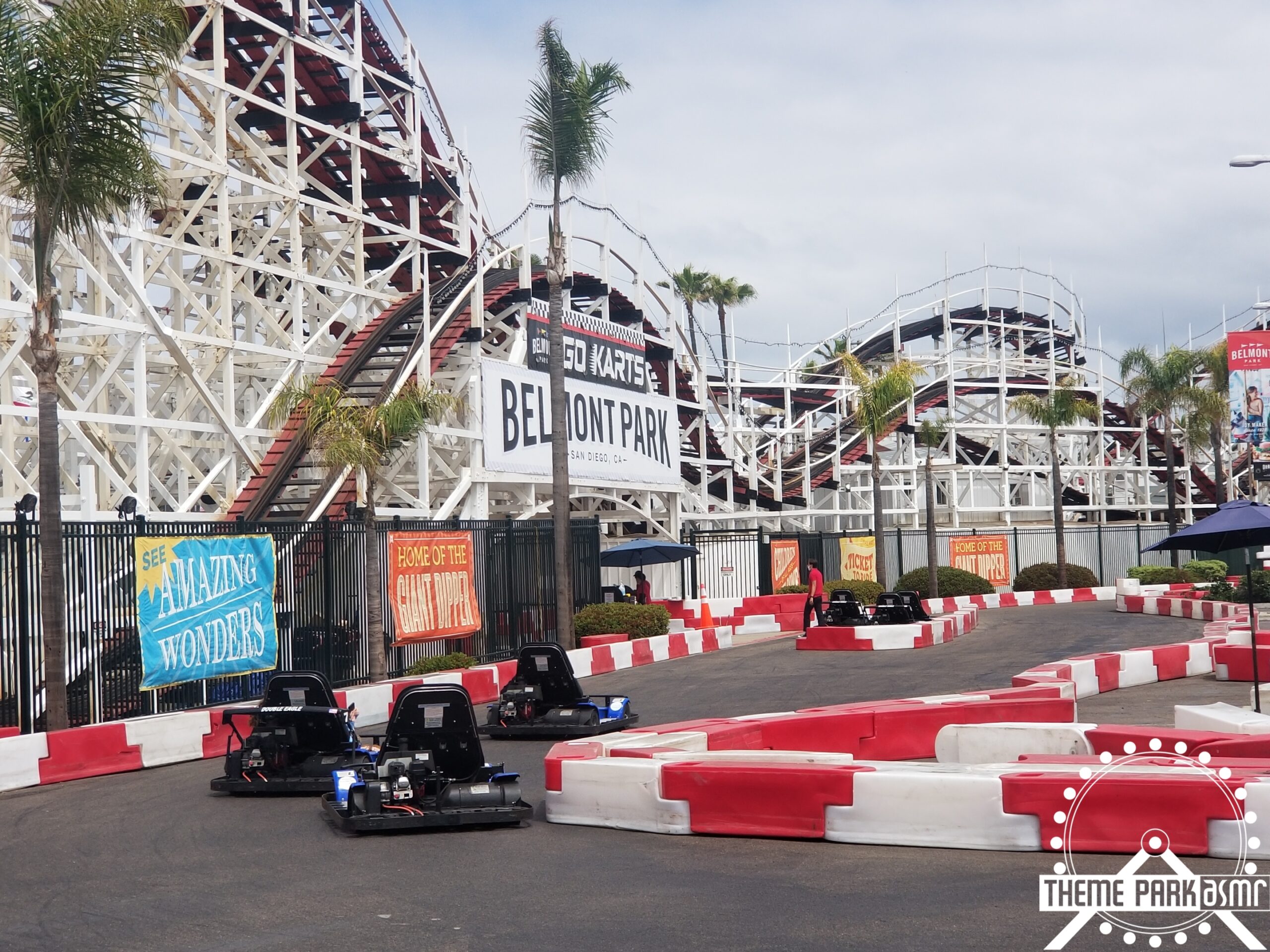 Belmont is a nearly 100-year-old park that opened on July 4th, 1925. Its biggest draw is the park’s original wooden roller “The Giant Dipper”. After an initial heyday and surviving The Great Depression the park went through ups and downs in popularity, maintenance, and ownership. Some of the park’s struggles include the coaster catching fire in 1955, resulting in the loss of life of the ride operator and causing severe damage to the coaster. This was immediately followed by the park declaring bankruptcy. Belmont Park continued to fall into disrepair until closing in 1976 where it faced demolition. (As I was writing this, my mother informed me that she and my aunts were some of the folks who “closed out” the dipper riding it on its last day.) Demolition was thankfully halted when a group of locals formed the “Save the Coaster Committee” who took over ownership of the ride and fought to get the coaster recognized as a landmark. Unfortunately, the committee failed to raise the funds for restoration and the coaster sat dormant until a new developer arrived in 1989. Working together with the owners of The Big Dipper’s sister coaster at the Santa Cruz boardwalk the now San Diego Coaster Company was formed. In total, the restoration of the coaster cost $2,000,000 and The Giant Dipper reopened in August of 1990. Since then the area that makes up the park has been revitalized with newer attractions, games, and dining.

Parking is free but being alongside a popular beachfront the parking lot fills up quickly. I recommend avoiding the parking spot hunters blocking traffic in the lot adjacent to the park and parking across the street. The earlier you arrive the better the parking will be as well. I’d say by noon the lot where we parked was nearly full.

Entry to Belmont is free and each attraction is individually ticketed, similar to midway style fairs and parks. If you and your party meet all the height requirements and wish to do most, if not all, the attractions the wristband would be your best option and lets you re-ride as well. The escape room, Go-Karts, and The Plunge are still separately charged. Each wristband costs $56. To give you an idea of the costs a single ride on the Big Dipper is $7 and the carousel is $4.

The park is laid out along 2 main walkways in which food, games, and attractions are crammed together. The layout is reminiscent of when you would try to maximize space in a game of Rollercoaster Tycoon, ride queues tightly zig-zagging along walkways and other rides. 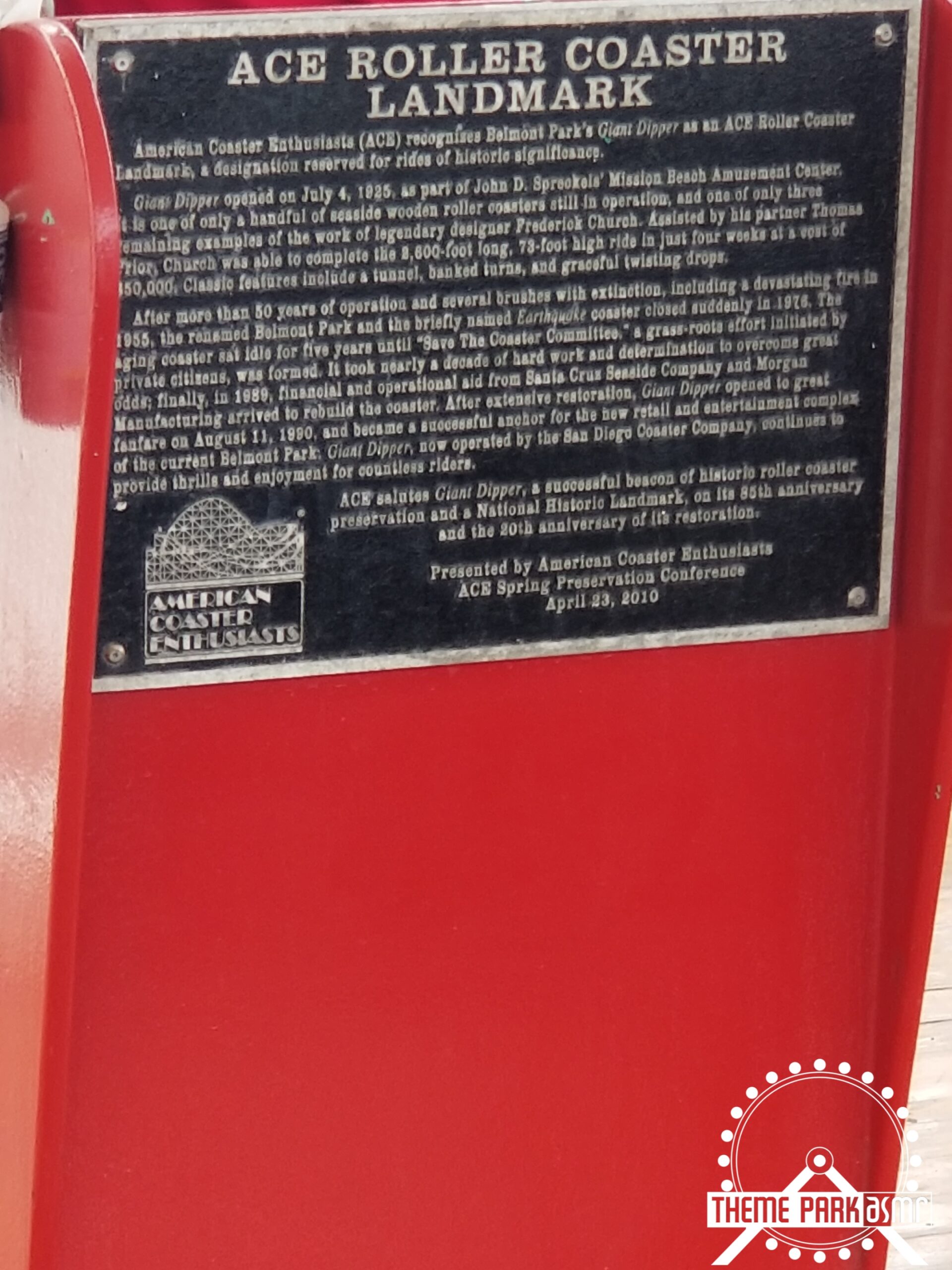 This is a classic wooden rollercoaster, with all the sounds and body rattling you would expect. Though, in my opinion, I feel more shaken by the Matterhorn at Disneyland. The initial lift awards you a beautiful view of the coast and surrounding area. 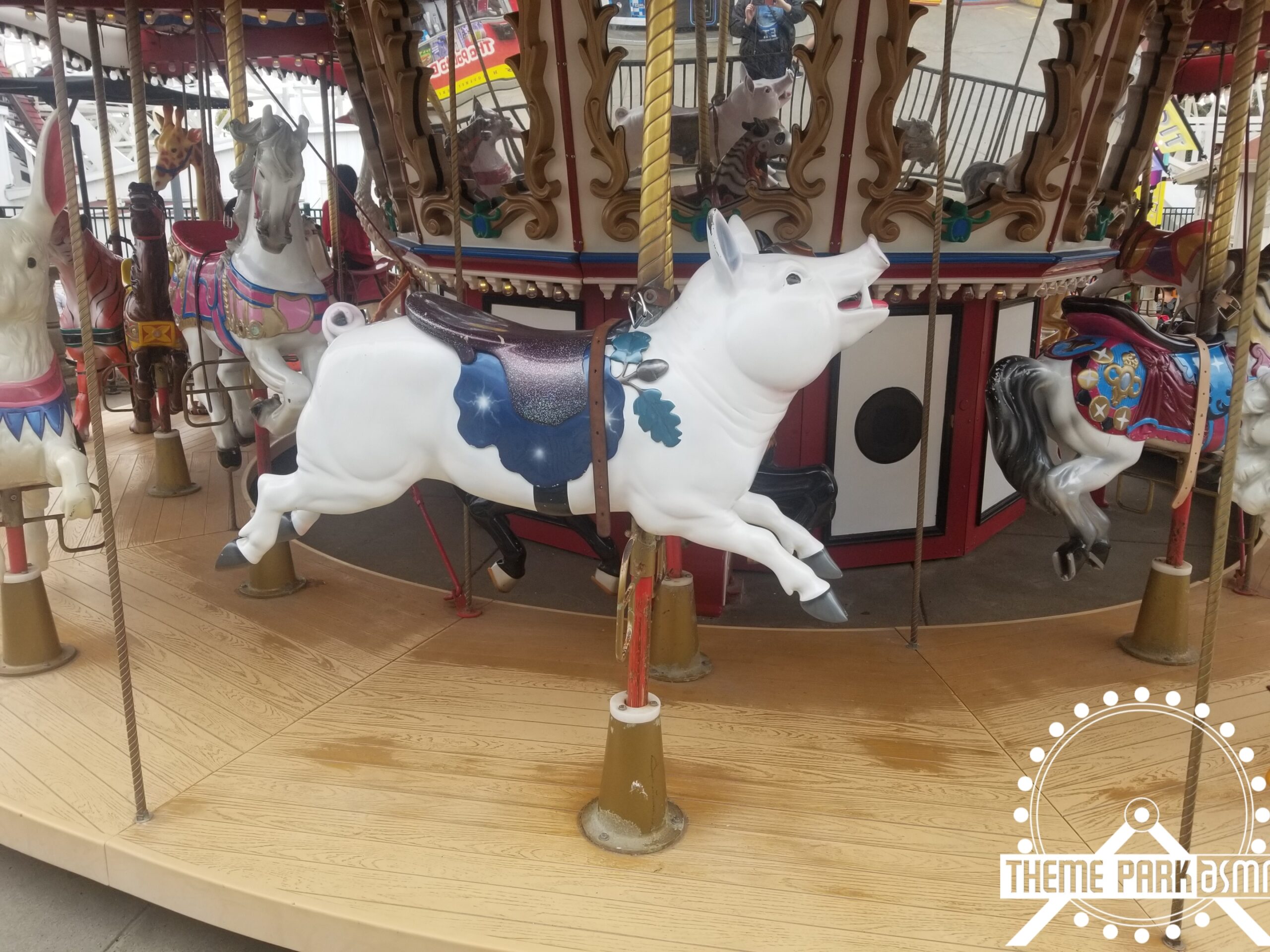 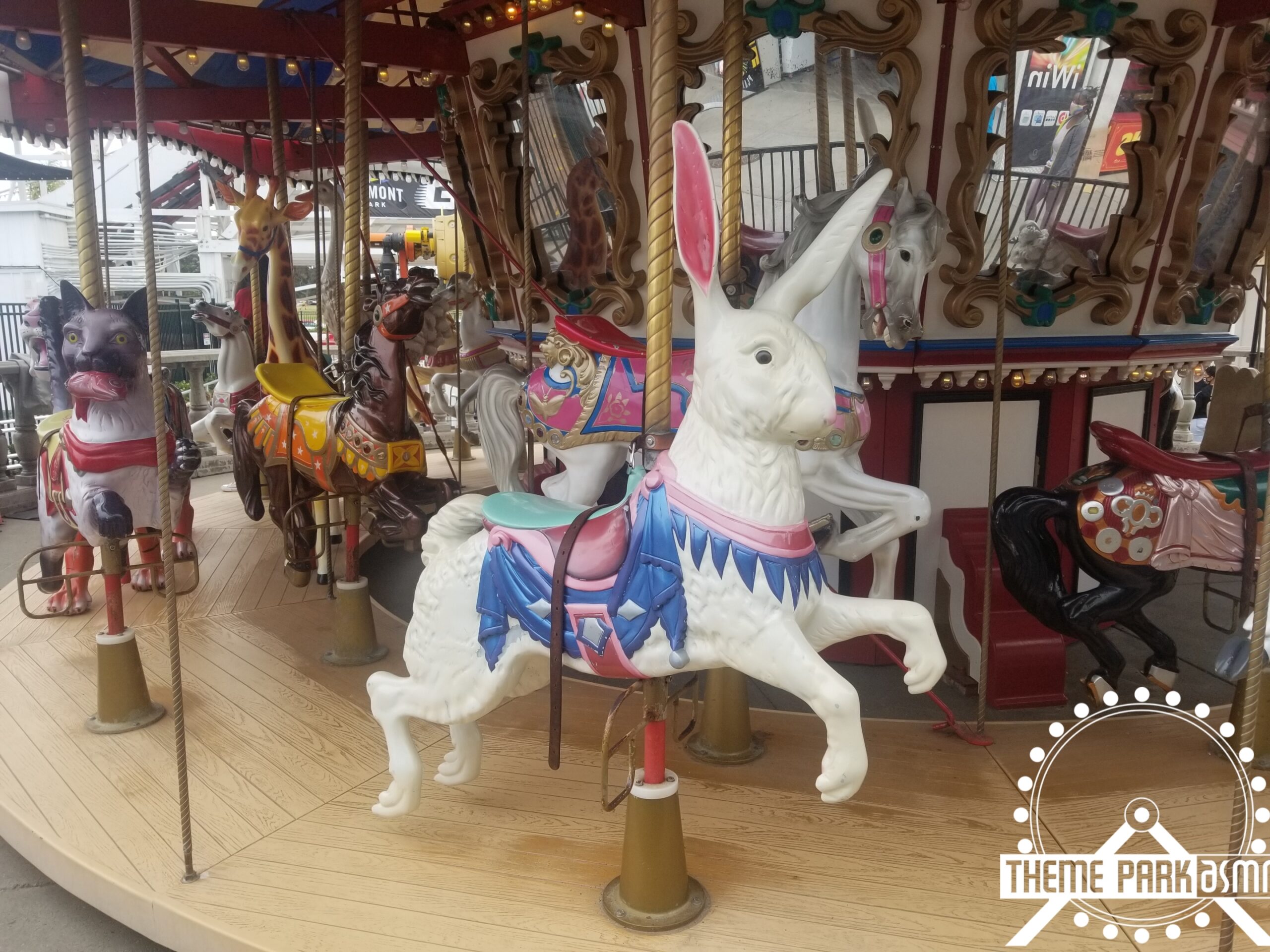 This is a small, antique reproduction carousel. Along the top it features several depictions of San Diego landmarks and offers a variety of fanciful animals to choose from. I was able to snag the rabbit but I must confess I was sad I did not get to ride on the piggy. 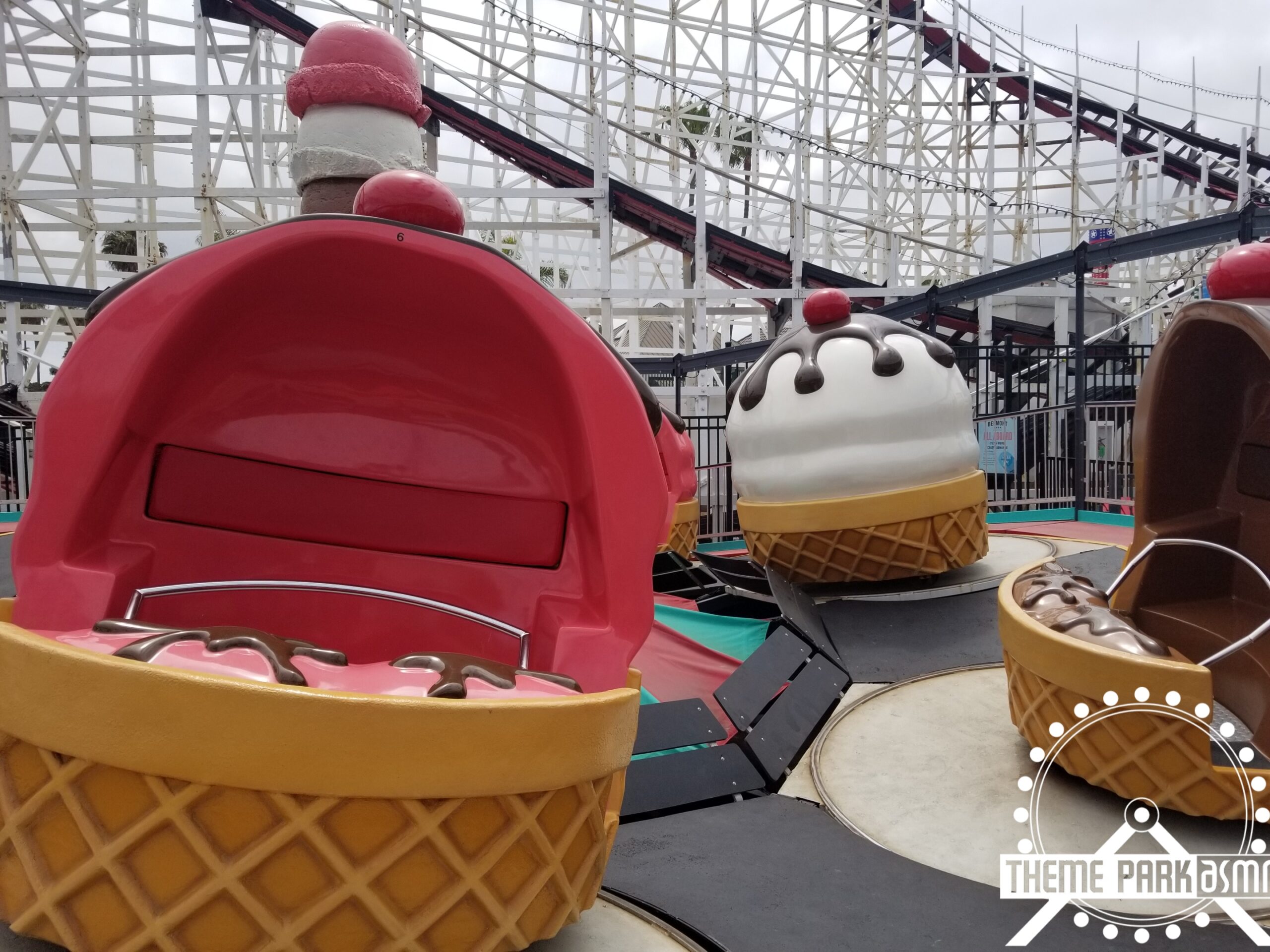 A classic and my favorite kind of carnival ride, anything that goes fast and spins is my jam. Why you would have an ice cream-themed tilt and not name it “Tilt O Swirl” is beyond me though.

Oh boy. So if you know me you know I have concerns when it comes to “Tiki” culture. An example being the depictions you see in Tiki Room at Disneyland, particularly the pre-show. Similar to Tiki Room this minigolf course is also sponsored by Dole and features the same amount of questionable depictions! (If you’re curious as to what issues lie inside of tiki culture this article from the Los Angeles Times may be a good starting point for you.) On a technical level, the course makes creative use of limited space and includes some less-than-well-kept decor that really seals that “Local Park Vibe.”

The arcade is small, cramped, and features a mix of prize and video games. Similar to Dave & Busters you use a card charged with funds to play. Each game is a $1 and I spent most of my money on a Willy Wonka-themed coin pusher game, as those are where my gambling addiction fully comes out. 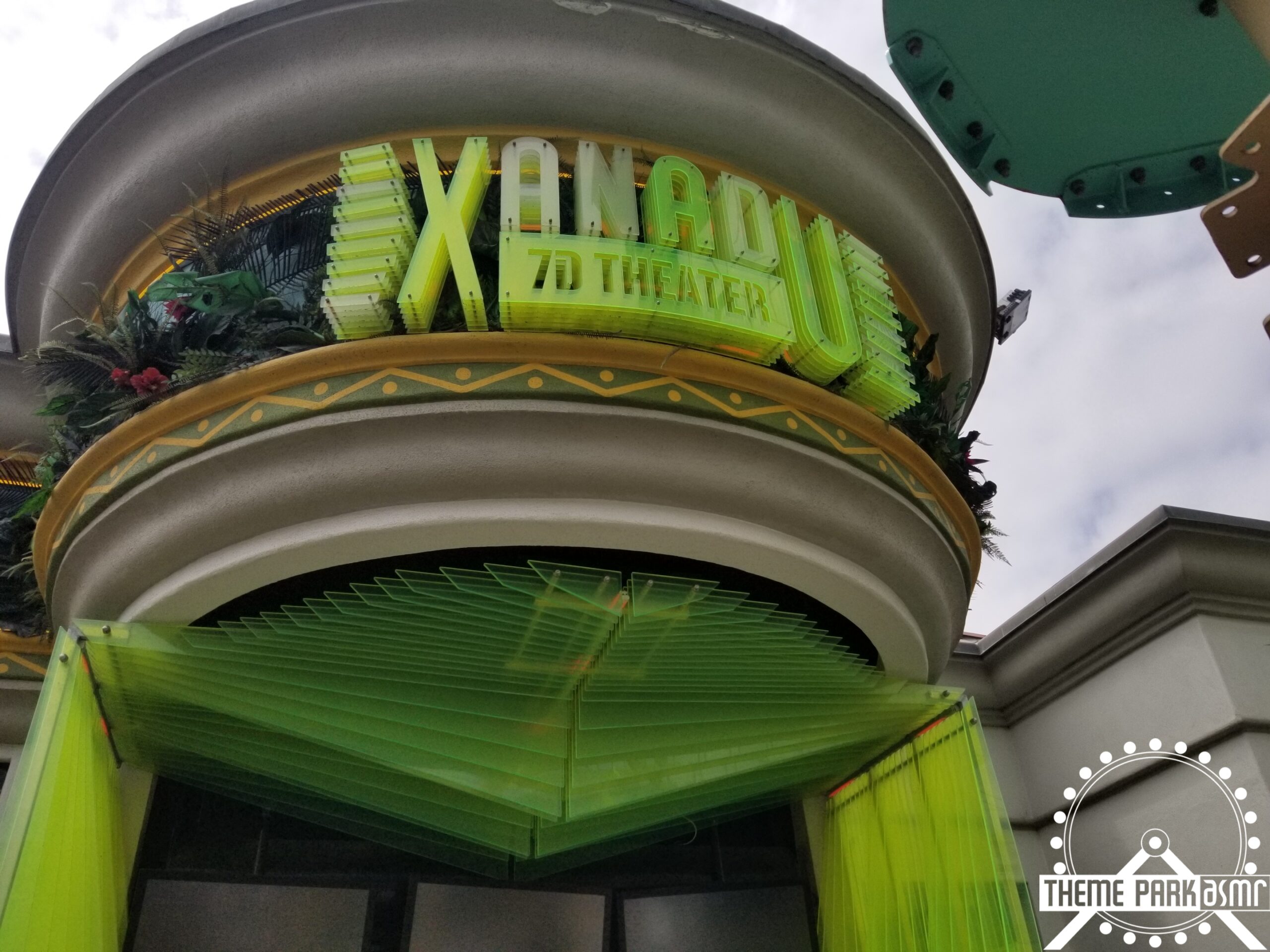 After looking into the company who develops the films used for the theater I was very disappointed we were unable to try it out. Triotech provides a variety of X-D experiences where the audience can interact with what’s being projected in front of them, like a 3-D Kinect game. Many of the graphics have an early 2000s PC game aesthetic such as in the trailer below for “Forbidden Mine”, one of the advertised movies at the Xanadu theater. Sadly there is nothing with Olivia Newton-John.

The Plunge is a recently renovated historic pool that offers recreational swim options as well as a gym. Various passes and options are offered to guests and more info can be found here. 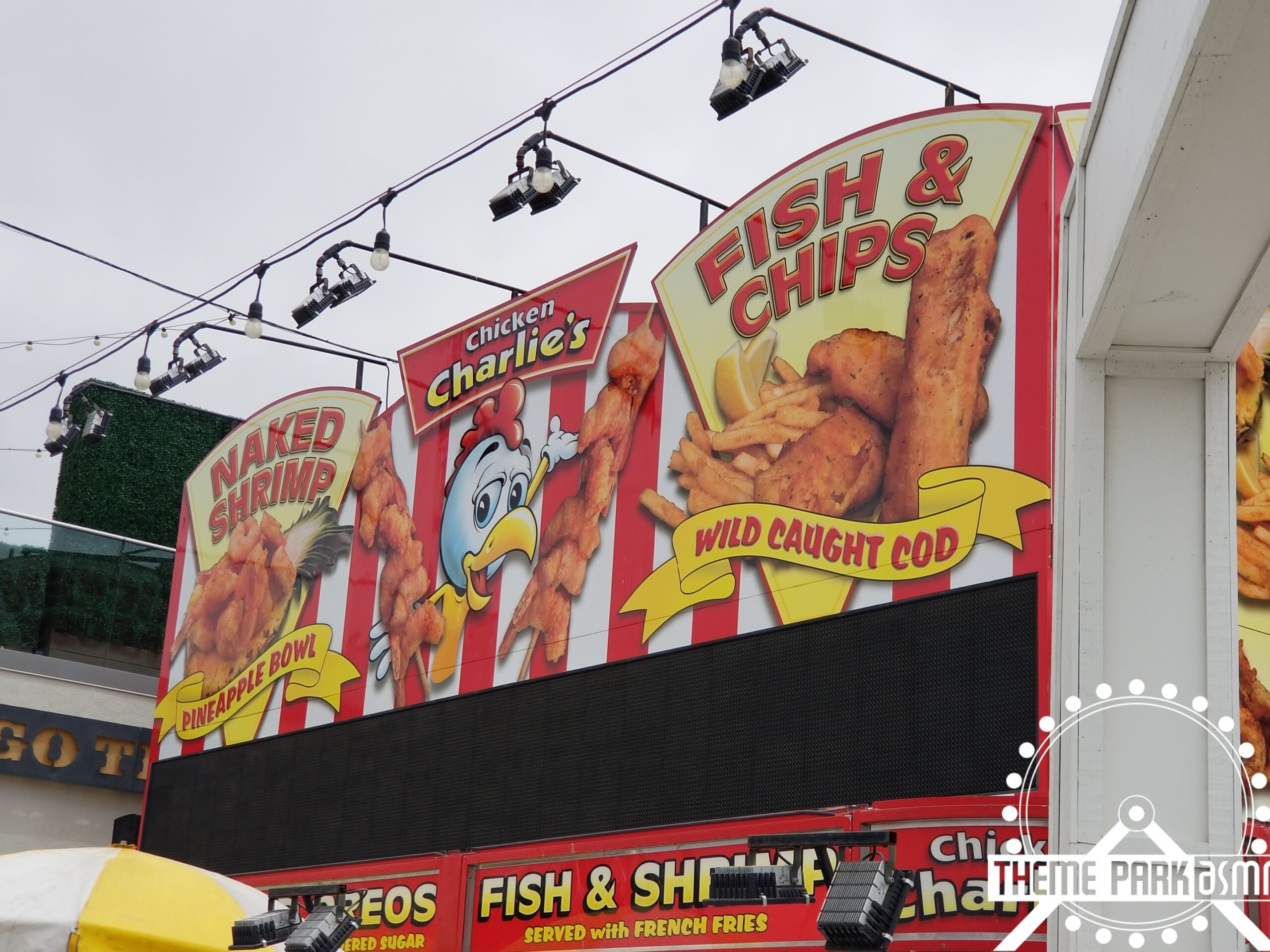 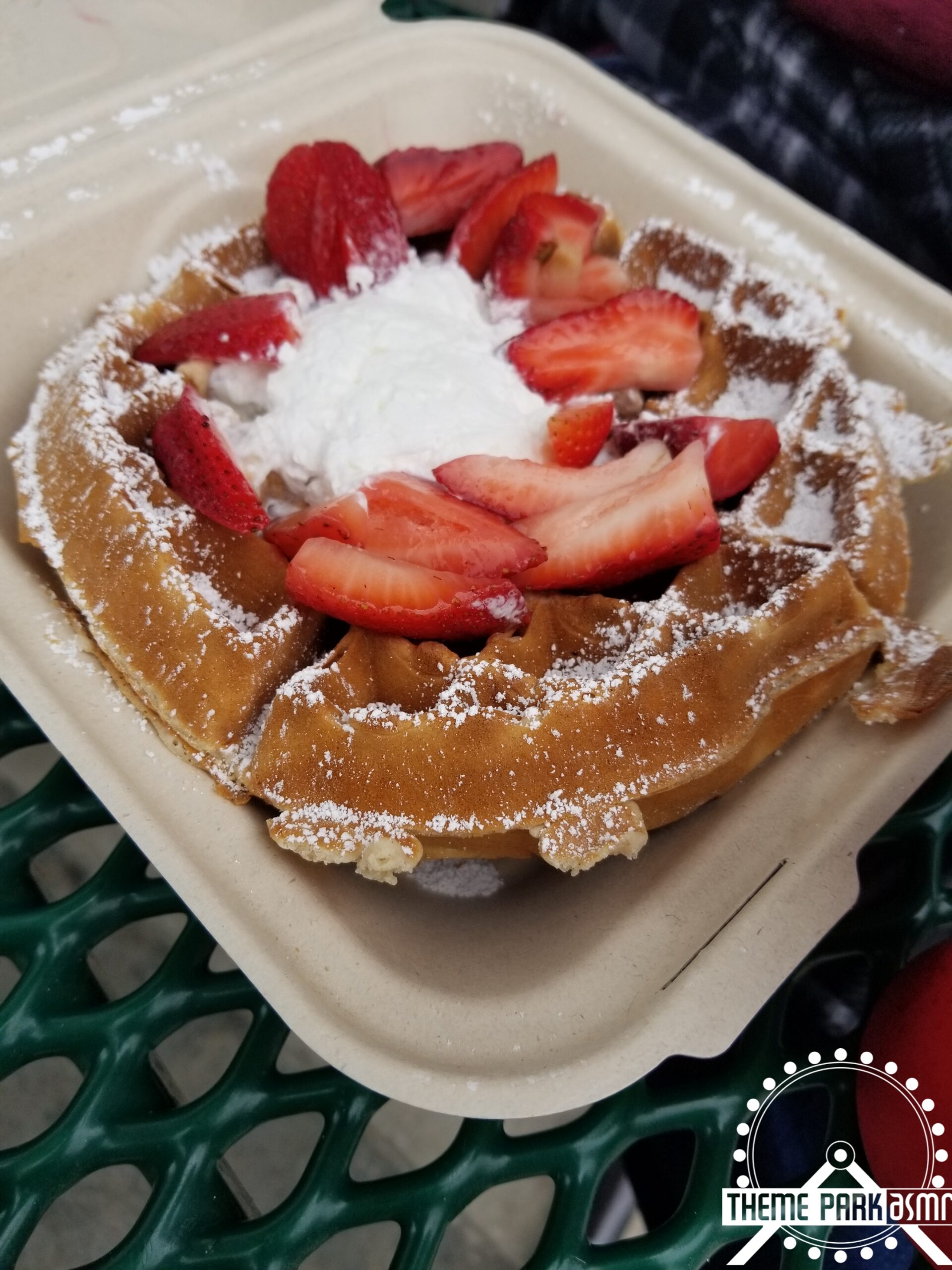 Throughout Belmont is a slew of meal and snack locations, including a Round Table Pizza, Dole Whip stand, Draft Brewery, and a Chicken Charlie’s. Chicken Charlie’s is my go-to fried, bad for your health amusement food. We got chicken and waffle, bacon-wrapped pickles, and fried avocados. The key thing to know is while Chicken Charlies is on the pricey side it’s cause almost every item feeds 2 people.

Oooh boy, while the park website states that masks are required we saw no enforcement of this rule anywhere in the park. The arcade is close quarters and only some folks will follow the space markers in the ride queues. Had my partner and I not been fully vaccinated, and stayed masked, we would have left much earlier. This problem seemed to increase later into the day as more folks came in from the beach. So if you’re somebody who hasn’t been able to or cannot be vaccinated yet I would wait.

If you’re a local and looking for a good way to spend a few hours or an enthusiast for historical rollercoasters Belmont is worth checking out. With us not being out of the weeds yet with covid as mentioned above please take any and all precautions before visiting.

The Triumph of the Giant Dipper

Back to Belmont Documentary 1993