It took nearly 3 hours of waiting my turn for reservations but I secured my spot for the opening of Knott’s 100th Anniversary event and the beginning of their Summer Nights series. So on May 21st my partner and I got up early, drove ourselves to Buena Park, and rode my first dark ride of the year. 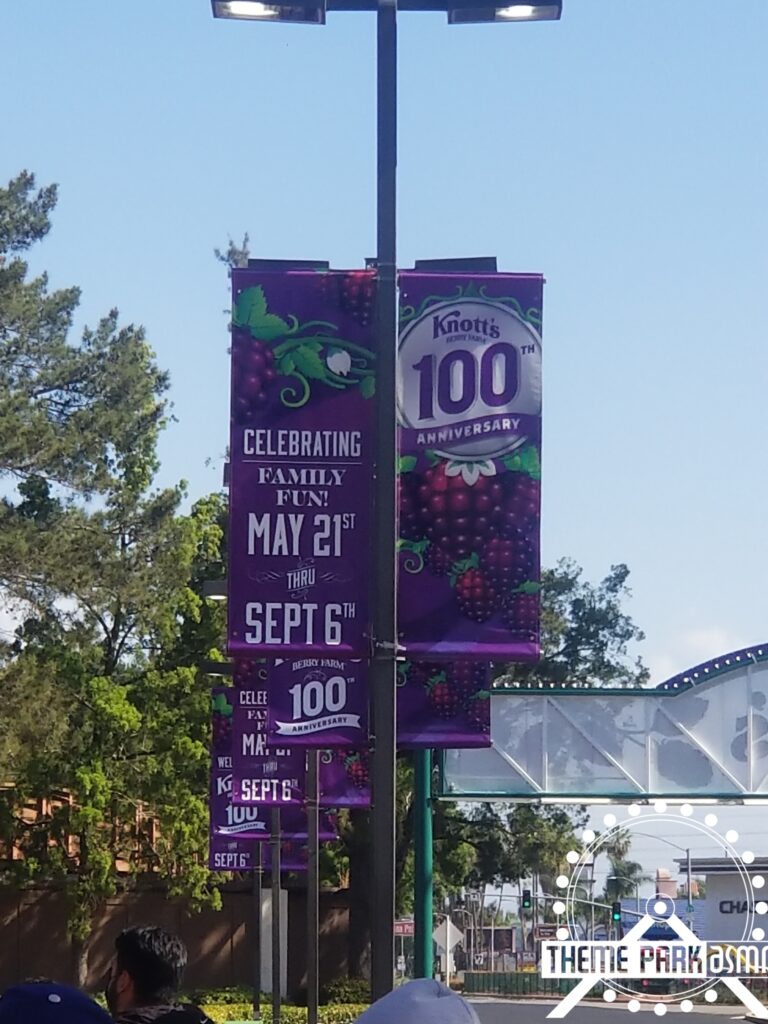 I reserved for the earliest time slot available, 10 am, and we were able to queue and enter the park early around 9:30 am. To my surprise, most folks opted for the later reservation slots (I’m assuming to enjoy the summer nights festivities) so we were the first folks of the day to queue up for Knott’s Bear-y Tales: Return to the Fair, the sequel to the original ride from the 70s. 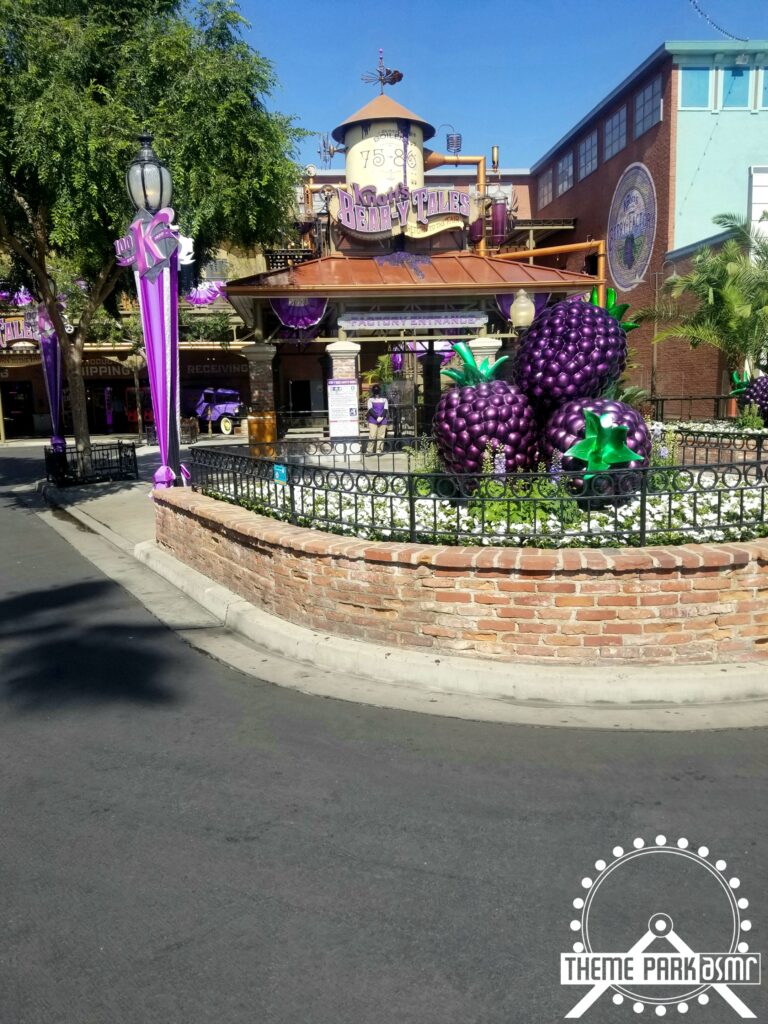 Knott’s Bear-y Tales operated in the park from 1976 to 1985 and was designed by former Disney Imagineer Rolly Crump, the psychedelic artist whose design work includes iconic attractions The Haunted Mansion and It’s a Small World. The ride took you on a tour following the hijinks of Crafty Coyote as he tries to steal boysenberry pies from the pie factory and Boysen and Girlsen, anthropomorphic bears and pie baking enthusiasts. The tour went through the factory, a musical frog forest, a scary thunderous cave, and finally to the fair where Crafty is arrested for crimes of pie thievery and Boysen and Girlsen win the blue ribbon for their pie. The ride lasted a little over a decade before closing and eventually was replaced with “Kingdom of the Dinosaurs.” Thankfully memory of this attraction has survived through the years thanks to dedicated fans and early home video. I have linked one below from Knott’s Bear-y Tales Preserved on youtube.

After the closure of Kingdom of the Dinosaurs the space sat empty for a few years until being replaced by Voyage to the Iron Reef, a rocky attempt at a steampunk 3-D shooter. Iron Reef lasted 5 years before being closed in early 2020 when it was announced that Bear-y Tales was making a comeback. The new ride would be a re-skinning of the Iron Reef, made by the same company but leaning into the charm of the original Bear-y Tales. It was intended to open in 2020 to coincide with the original 100th-anniversary celebration but like many things was put on hold due to the pandemic. During Knott’s food tasting events guests could see the changes to the ride on the outside, new paint jobs that hinted at the attraction inside and calling back to the old-timey aesthetic and history Knotts is embracing. 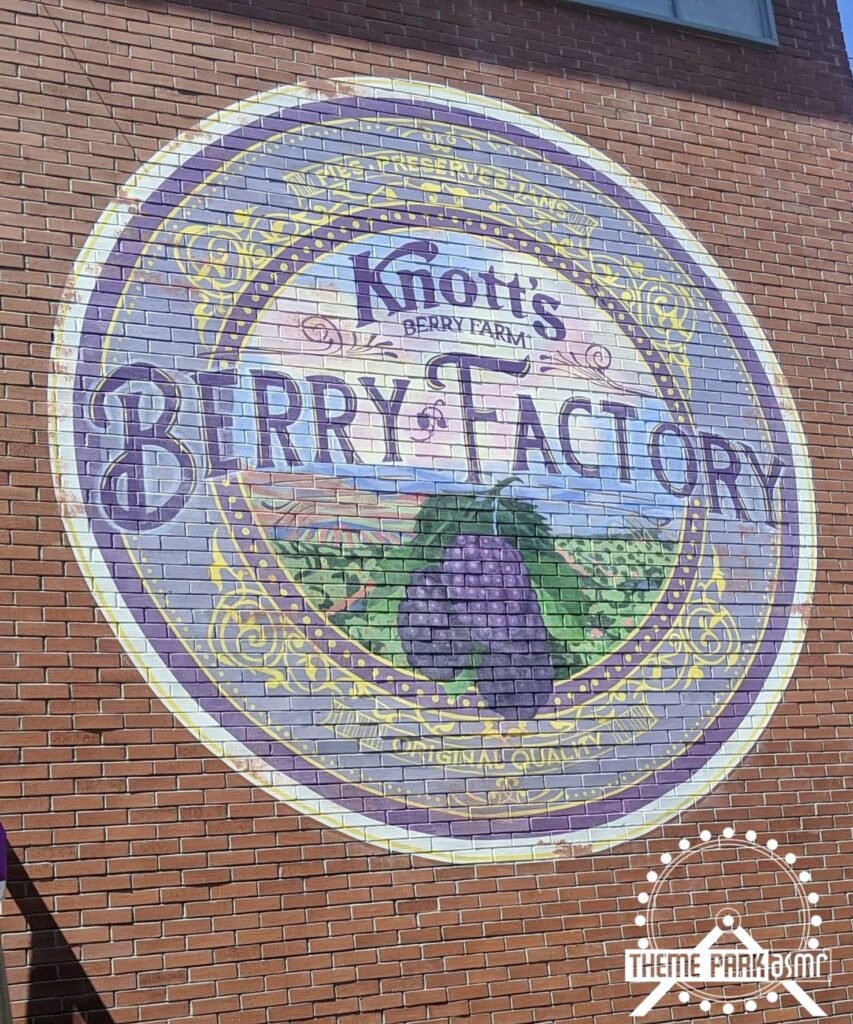 Returning To the Fair

Being first thing in the morning we were able to breeze through the bottom portion to the queue and proceed to the upper walkway, where immediately you can see the influence of Rolly Crump’s original artwork.

I was only able to peek into the overflow queue, themed as part of the pie factory, before proceeding to the loading dock. Behind the spruced-up ride vehicles is a delightful mural containing locations and characters we would meet on the ride ahead. I’m very partial to the coyote child with the colander helmet. 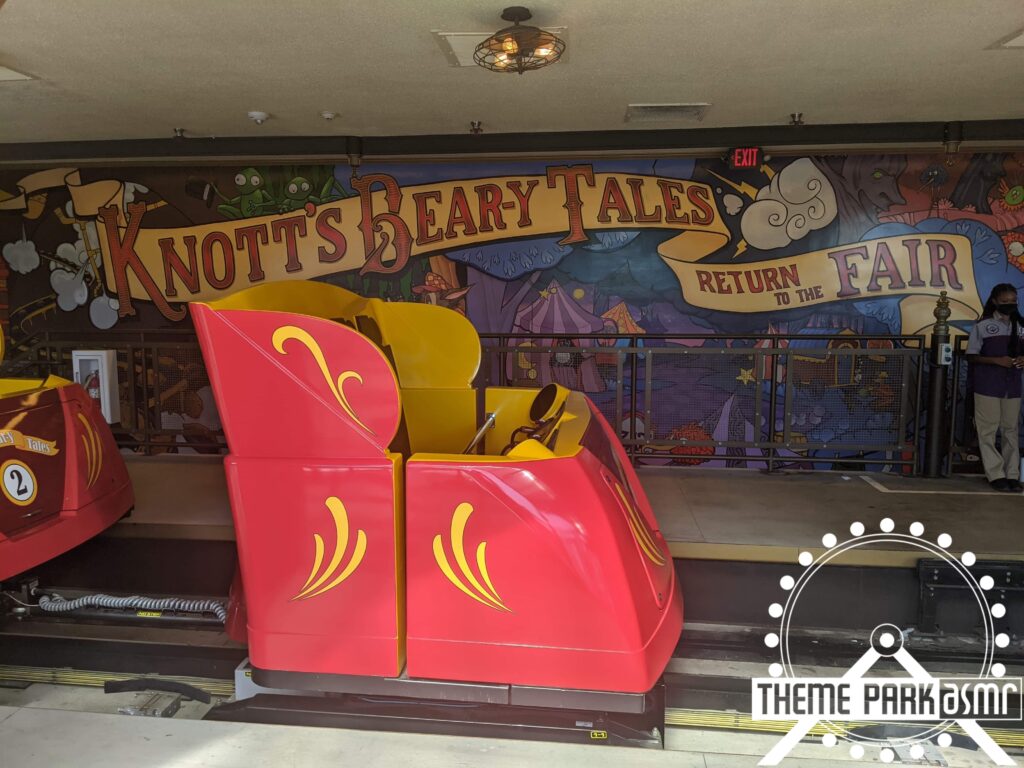 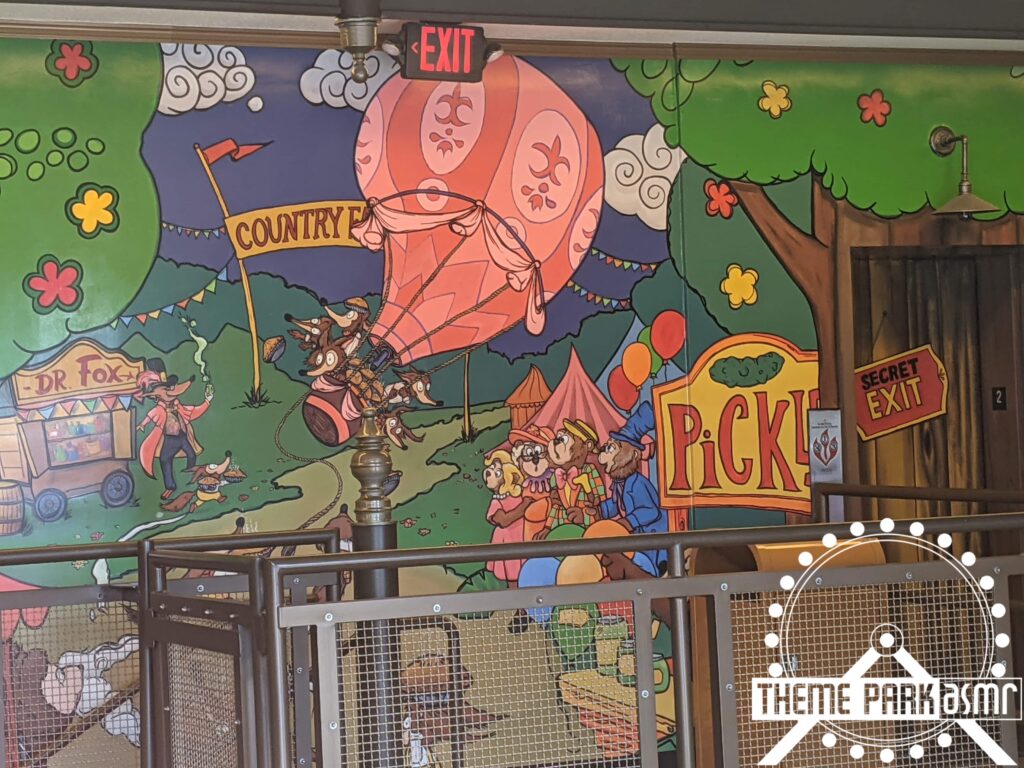 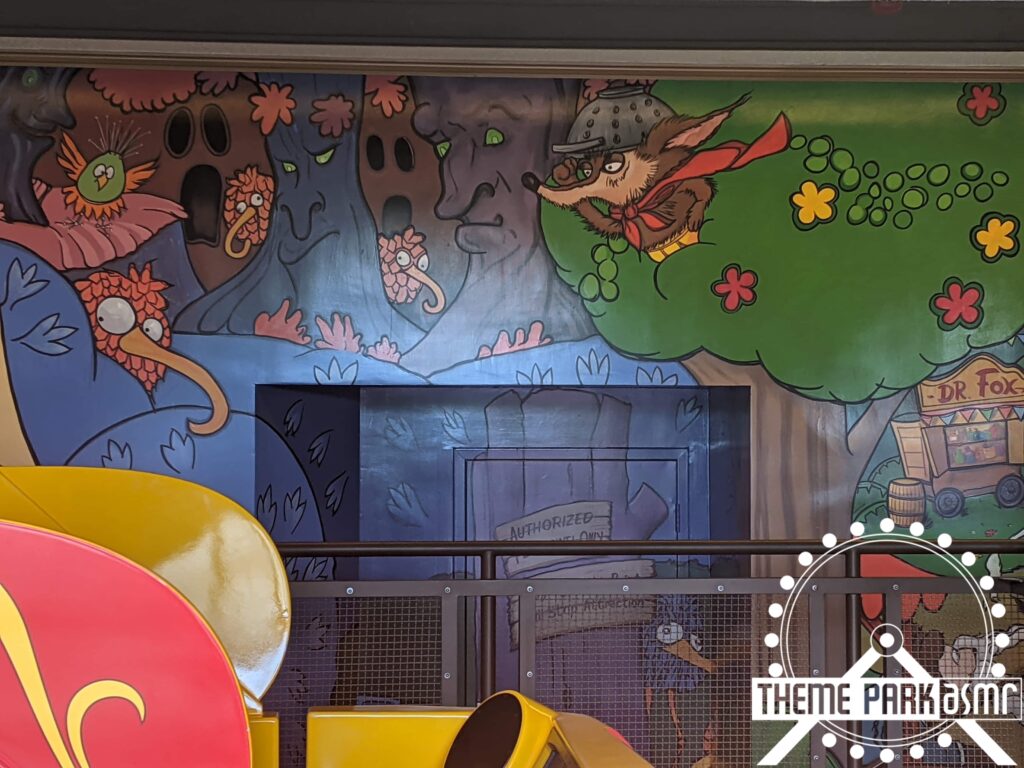 After grabbing a pair of 3-D glasses provided for you at the end of the queue and loading into your vehicle you are greeted by the device that will help you on this new journey, the berry blaster. 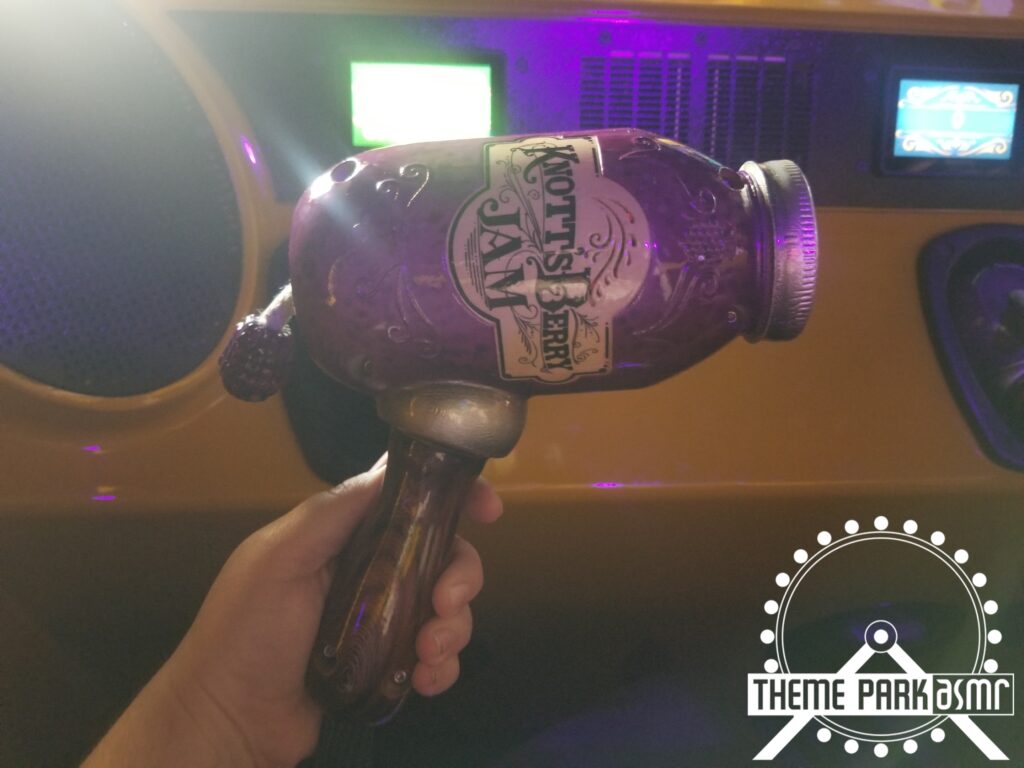 Why do you need the berry blaster you ask? Well, it’s cause Crafty Coyote is back to steal pies, except now he has help in the form of his gaggle of coyote children. Your objective as you travel down the route of the original ride is to shoot away as many pies from these rascals as possible as you make it to the fair. I’ve provided video below, as it turns out you can just put your 3-D glasses over the camera lens and it works just fine.

I can’t deny the ride is very charming, and I appreciate the use of updated music from the original. (The froggy forest is a bop.) Upon my second ride through where I focused on filming rather than target shooting I found myself having more fun looking at all the little details in the ride. The screen sequences can be rather large and overwhelming and it’s easy to miss out on what’s going on. In addition, the pull string on the blasters are a bit short and tight making repeat shooting quickly tiring. During our rides we noticed a trend of vehicles slowing or completely stationary for long periods of time, and while the game allows you to continue to shoot you do not gain any points while your vehicle is not in motion. Something I wish we had realized a little faster to save our arms for the shots that count.

During our time in line the ride also had technical difficulties making the wait longer as the ride vehicles go through safety procedures, which includes completing a full ride circuit without passengers before attendees can board again. While these issues are a far cry from the ones I frequently experienced on Iron Reef, it does hinder the experience a little. All the best parts of the ride come from the art and story, which you might miss if you’re too busy in blaster mode. If possible I suggest riding this twice, so you can focus on those aspects without being distracted by blasting. 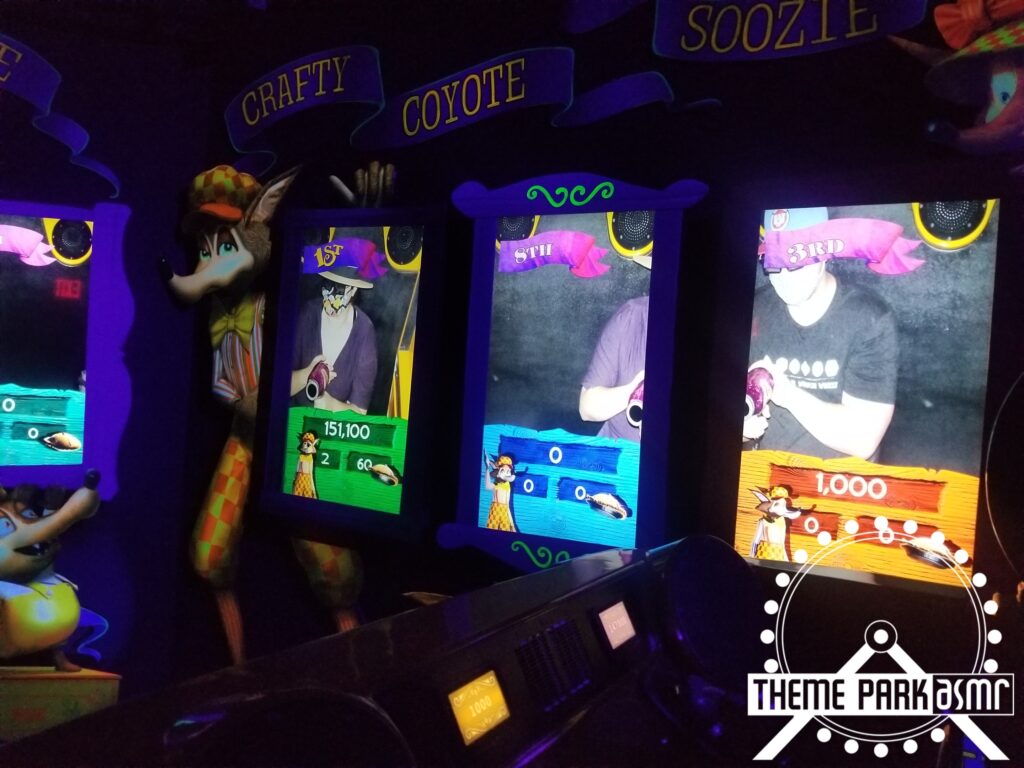 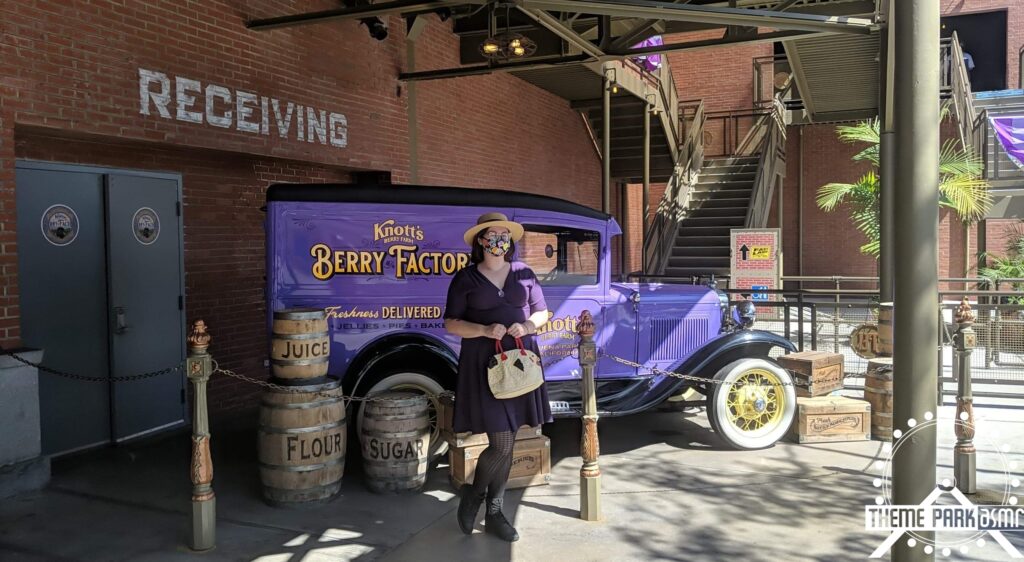